As the evolution of the trawler and cruising motoryacht continued into the 1980s, there was growing interest in developing boats with raised pilothouses to separate the helm station from the rest of the boat. Robert Beebe wrote about this in his seminal Voyaging Under Power. The need for a protected helm, from which the boat could continue on course at sea, without the distraction from galley lighting or crew quarters, day and night, was considered important enough for designers to include models with a raised pilothouse, much like one sees on commercial vessels.

The introduction of the Krogen 42 in 1976, then the Fleming 55 in the mid-1980s (as Grand Banks owners clamored for a pilothouse yacht with the quality of Grand Banks), followed by the Nordhavn 46, all set the expectation that a raised pilothouse was now a requirement of any serious passagemaker and ocean-going cruising motoryacht. While they have been around for quite some time, in Northern Europe and elsewhere, Art DeFever was a big proponent of the style, as well as Willard and other designers building pilothouse cruising yachts in fiberglass, wood and steel, and demand for raised pilothouse cruising yachts became mainstream by the 1990s.

Of course, there have been pleasure yachts built on commercial fishing hulls, such as Delta Marine’s 70-foot Zopilote, which circumnavigated before it began showing up on the bucket list of those in the world cruising community. The Pacific Northwest has a history of pilothouse trawlers, as the conditions are demanding for the fishing fleets that work the Northwest and Alaska.

In its most common form, the raised pilothouse is located up a few steps from the saloon and galley level, bringing the pilothouse above the rest of the boat. This provides a commanding view from large forward and side windows. There are generally one or two doors to the side decks, many of which are well protected by a Portuguese bridge. The large helm console has enough real estate for a full complement of cruising electronics, navigation instruments, VHF and SSB radios, engine and generator controls and gauges, bow and stern thrusters, windshield washer, horn, and firefighting controls. All of the electrical panels are usually in the pilothouse as well.

It is the command center for all the boat’s systems.

One can safely and comfortably drive this type yacht from the pilothouse in all weather, with air conditioning and heat to match the conditions. There is usually a fixed helm chair that is more of a throne. Crew can also enjoy the day’s journey in the pilothouse, seated on settees wrapped around a table. There is also a chart table and storage for navigation tools.

While an ocean passage on most other types of offshore boats calls for a complete wardrobe of foul weather gear and robust safety equipment, with harnesses and strobes, it is common to cross an ocean (or any body of water, for that matter) from the comfort of a pilothouse wearing flip flops.

Some pilothouse designs have access down to the accommodations from the pilothouse, but that not always. And while it is generally easy to bring meals, drinks, and snacks up to the pilothouse so the crew can eat meals together underway, that is also not always the case. The Nordhavn 62, for example, requires the crew to climb a steep set of steps, balancing plates, glasses, wine bottles, and cutlery while holding onto the railing for safety. It is just the nature of this design, which has about the most shippy profile as anyone will find.

Most pilothouse yachts have a large destroyer-type wheel for steering, but a trend today is to use jog sticks instead to control the autopilot(s) steering the boat. The big wheel is removed and stored out of the way.

Docking usually requires stepping out of the pilothouse, and many yachts have controls for using the thrusters and engine controls on handheld remotes or wing stations off the bridge or in the aft cockpit.

Whether the front windows are raked back for that “North Sea” look, are vertical as found on tug yachts, or slanted forward for a sleeker profile, standing watch in a raised pilothouse is a marvelous experience.

It feels like driving a small ship, or as close as one can get.

Join the Seattle Yachts team at the Seattle Boat Show at Bell Harbor Marina for an excellent selection of cruising vessels. 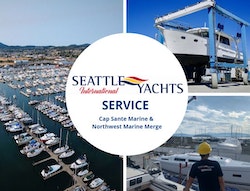 The merger of Cap Sante Marine and the Northwest Marine Center has created Seattle Yachts Service.

When the dream of owning a boat is only possible with spending less.