Without question, the sailing catamaran is the most active category of pleasure boat today, with a growing number of builders using fresh designs from a variety of naval architects. In the past decade, the sailing cat has gone from somewhat of an oddity to fully mainstream, as the benefits of the catamaran concept eventually lures traditional sailors away from the teak interiors and heeling in a monohull. Those new to sailing and cruising have no predetermined opinions, so are easily convinced of the advantages of a sailing cat, not having any familiarity of the issues associated with the catamaran’s early history.

There are no less than 20 builders of sailing catamarans around the world, and it is quite difficult to distinguish one from another at a boat show, where they take up significant real estate. Global catamaran builders now include Seawind, Leopard, St. Francis, Majestic, Knysna, Kinetic, Maverick, Antares, Lagoon, Discovery, Catania, Outremer, Nautitech, Fountaine Pajot, Balance, Bali, and Xquisite. There are also many custom yards, such as Alwoplast in Chile, that build custom cats to the designs of Chris White and Malcolm Tennant. It is an understatement to say the sailing catamaran has come of age.

The wide beam of the catamaran offers tremendous stability and visually open space. Accommodations are significantly greater that those offered by a monohull of the same length. Unless one is looking at a model built for the charter business, which maximizes the number of staterooms, the living spaces can be easily tailored for a liveaboard agenda with master stateroom, en-suite head, and storage in one of the hulls. Some cats put the master accommodations on the bridgedeck, so owners are not forced to sleep in a relatively narrow hull.

Modern sailing gear and systems make these boats much simpler to sail, but one must be aware of the wind conditions, as sailing cats don’t heel, so it isn’t obvious when it is time to reef or shorten sails as on a monohull. An eye on the wind speed indicator tells you it is time to shorten sail to not overpower the boat. Early catamarans could turn upside down and remain quite stable inverted. Modern cruising cats do not have this tendency, and it is rare for this to happen except for racing catamarans that push the envelope far offshore.

The wide and open bridgedeck allows a nice galley and saloon layout with large windows that keep things bright and appealing, wide sliding pocket doors often open onto the aft cockpit, creating a unique and open living space that is hard to beat except on a superyacht. Spending quality time in an anchorage with the boat opened is about as good as it gets.

Sailing cats are also known for the wonderful ability to have a large dinghy on davits between the hulls. This is not to be understated, as a good dinghy is vital for a cruising boat, and this is by far the best way to carry a dinghy. It is simple work to raise the dinghy at the end of the day, keeping its bottom clean and out of touch of sticky fingers when cruising remote areas.

In these days of social media, a growing number of couples sustain their cruising lifestyle through Patreon donations from their YouTube channels. This has become one of the best marketing programs ever devised. Interestingly, many of these couples were new to sailing, and started with a sailing cat. Other couples may have started their travels on a monohull but switched over to a catamaran after visiting other YouTubers on their cat. They saw firsthand that the step up in livability is profound. Watching the weekly exploits of young couples exploring the world on their sailing cats has captured the imagination of millions of people. No one has done a better job of promoting life on a sailing cat than these people, and a few of the most popular channels have over a million subscribers. No print ad in any magazine can approach such lifestyle marketing.

Catamarans don’t like weight, especially in the ends of the boat, although that is less of an issue then it once was. Still, it is healthy to be mindful of what comes aboard, and rather than bring dozens of books to read while circling the globe, it is better to have one’s library on a Kindle. That is a practical example of the mantra of the cruising catamaran sailor. And while a cruising cat may have water tankage for a couple hundred gallons of water, a water maker is often installed.

Sailing cats come with two engines set far apart, using either straight drives or sail drives. This is more than enough for economical operation and great maneuverability.  As cats don’t require much horsepower to move through the water, sailing cats between 42 and 46 feet typically have diesel engines rated at only 29 to 40hp.

Living on a catamaran at anchor is delightful, as the open space, especially on the newer designs, is open, protected, and spacious. Cats need a bridle when anchoring to keep them from swinging back and forth, which keep the anchor rode between the hulls. It is not a difficult skill to learn but is key to successful anchoring.

There is something quite idyllic about enjoying morning coffee on a swim platform, watching the fish that tend to circle around in the shaded water between the hulls.

The success of the modern sailing catamaran is ample proof that it is one of the most attractive choices for sailing and cruising. There are projects under way to take them even further as the boat of the future, with solar arrays, lithium battery technology, and developing electric drive systems to make them carbon free. No other cruising boat is a better platform for these developments, so it is likely sailing catamarans will be the tip of the spear of the future greener boating experience. 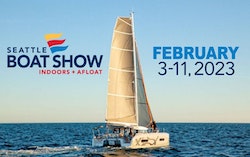