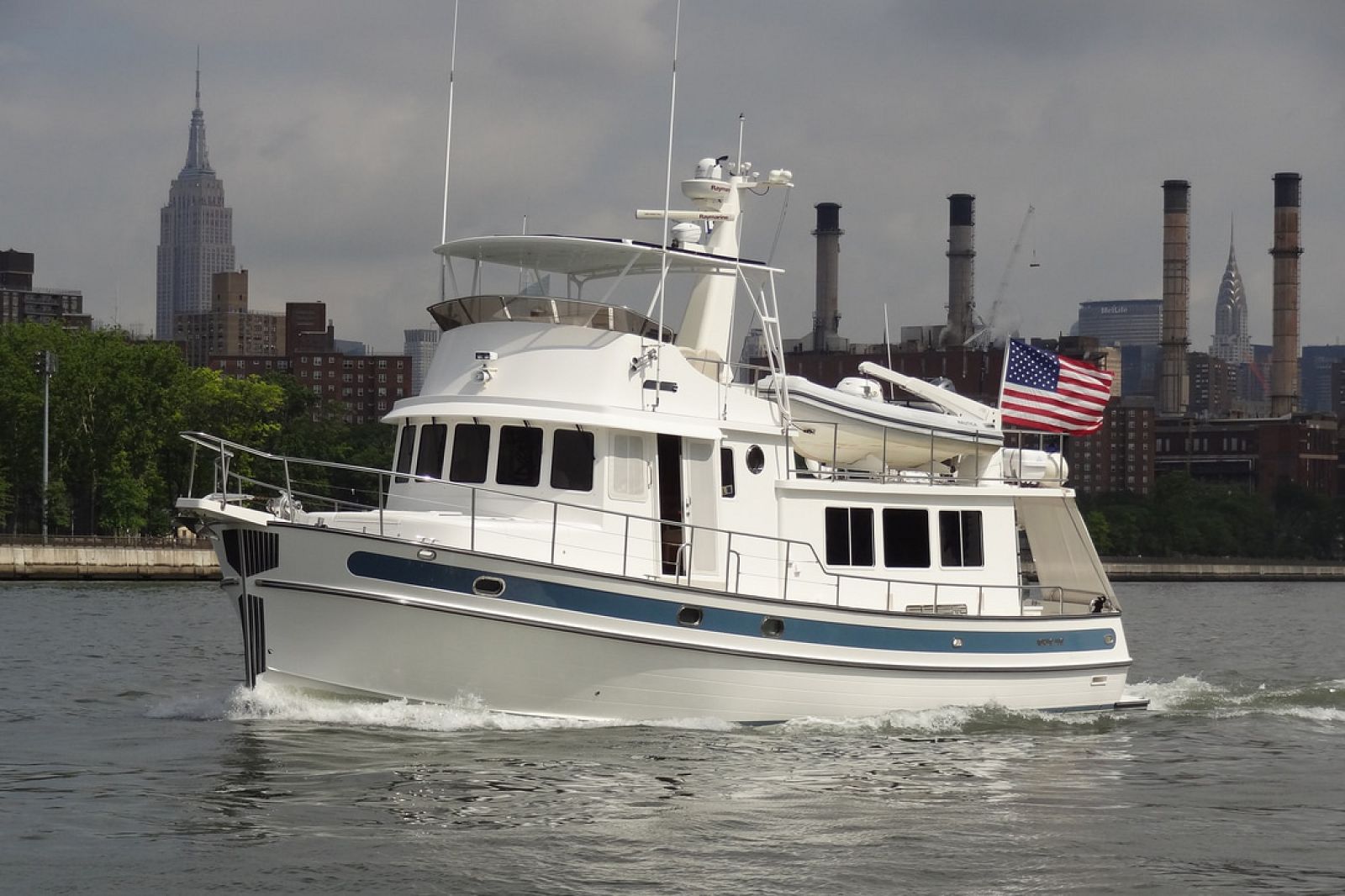 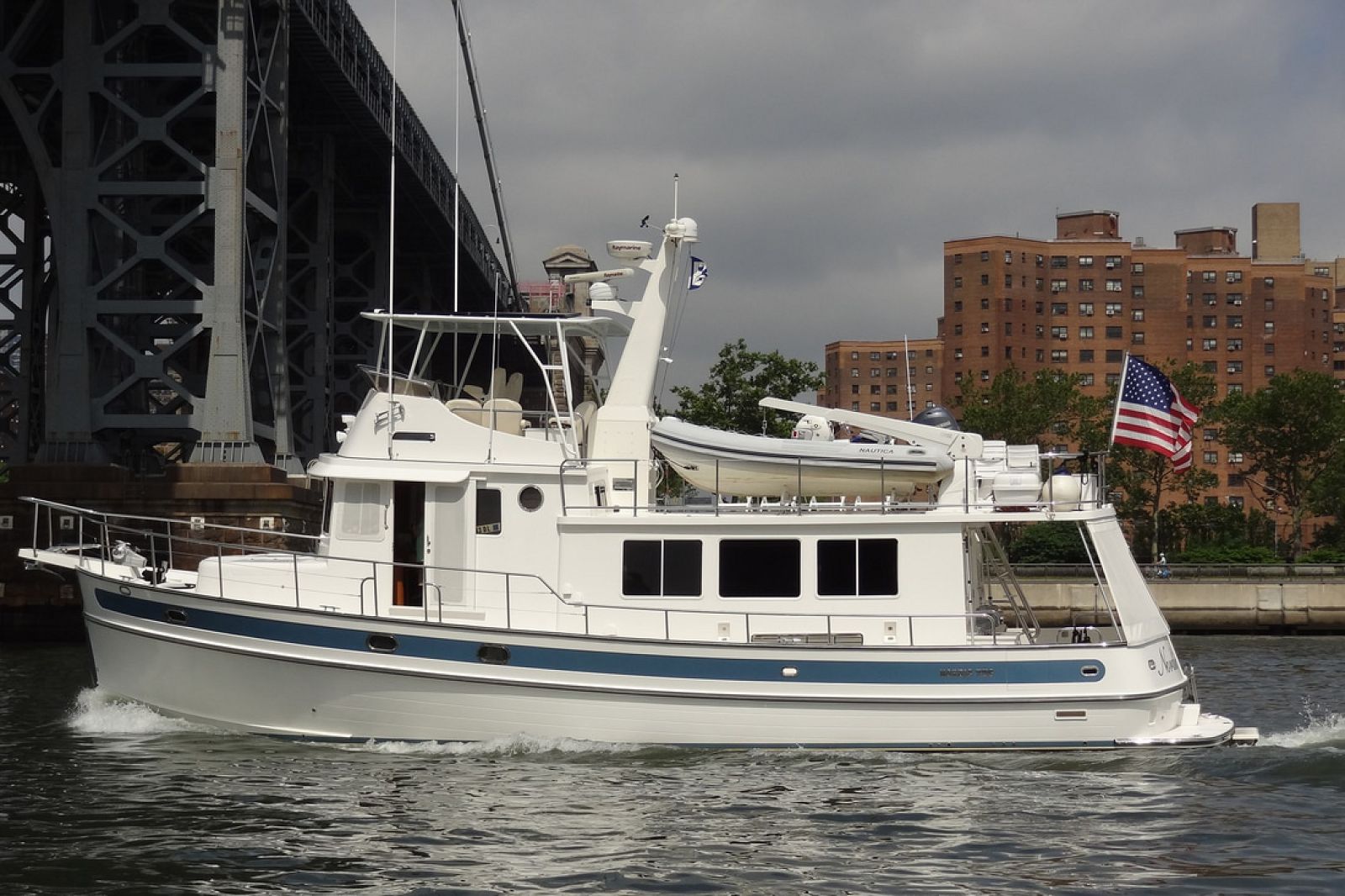 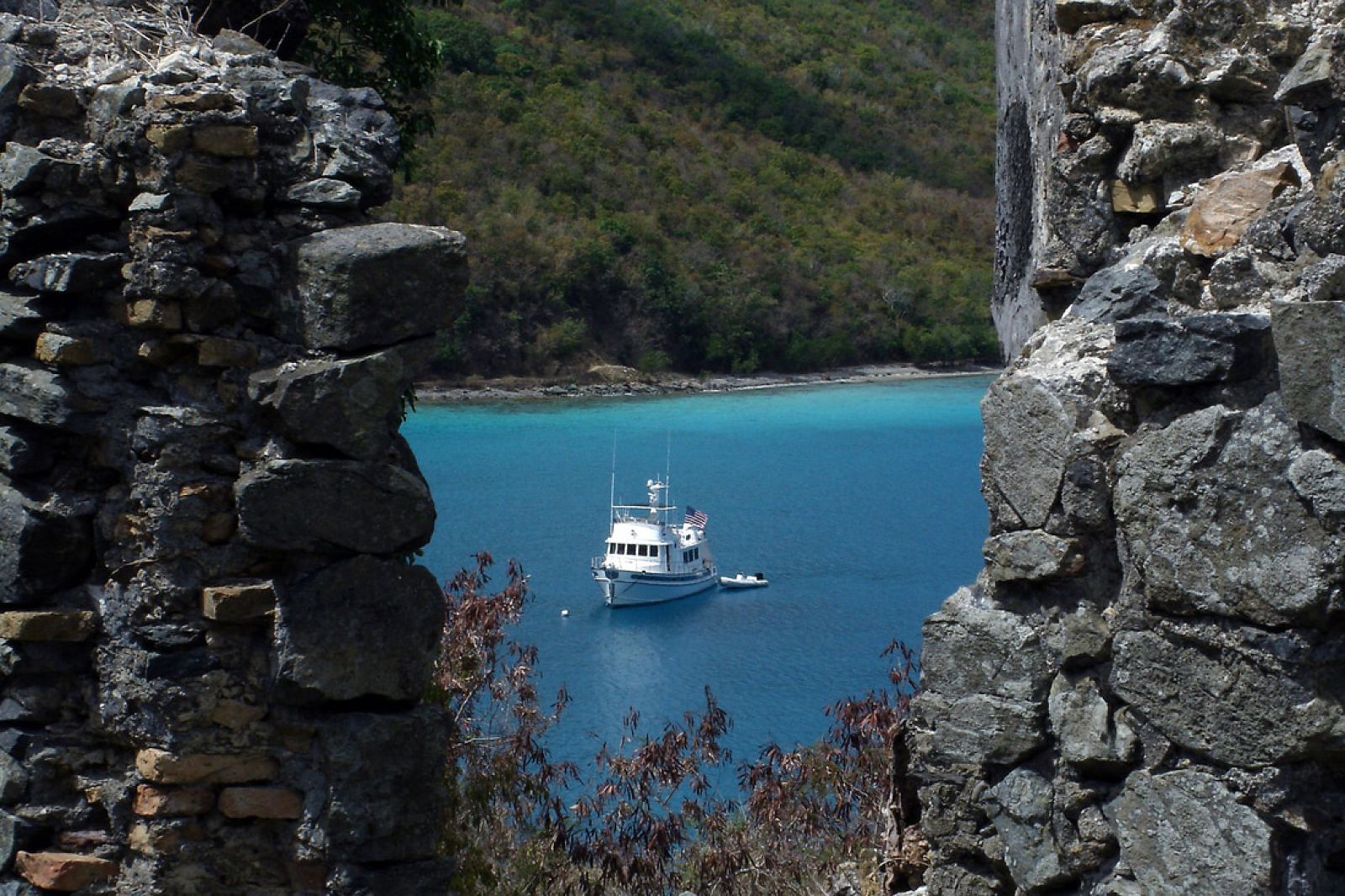 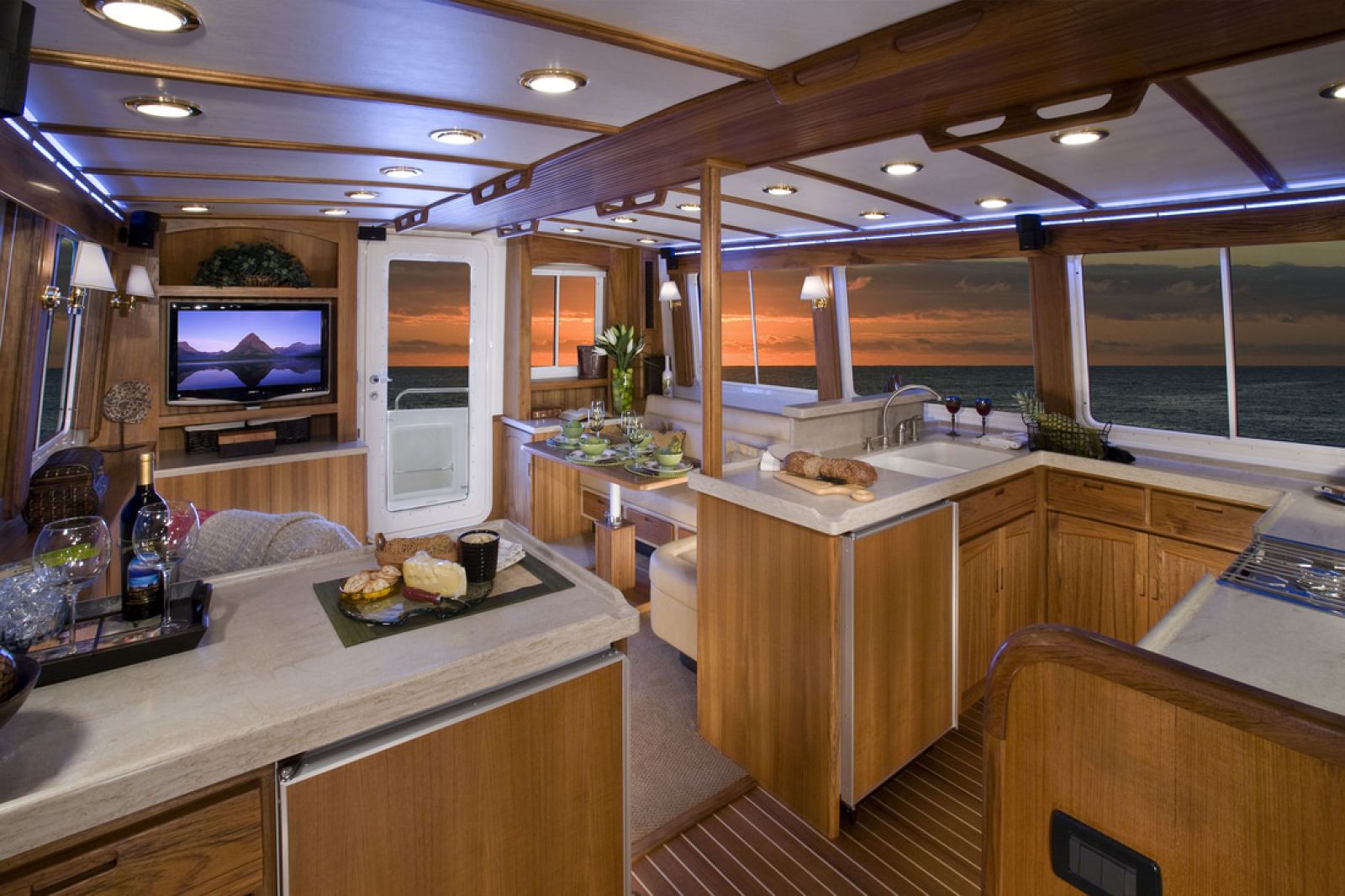 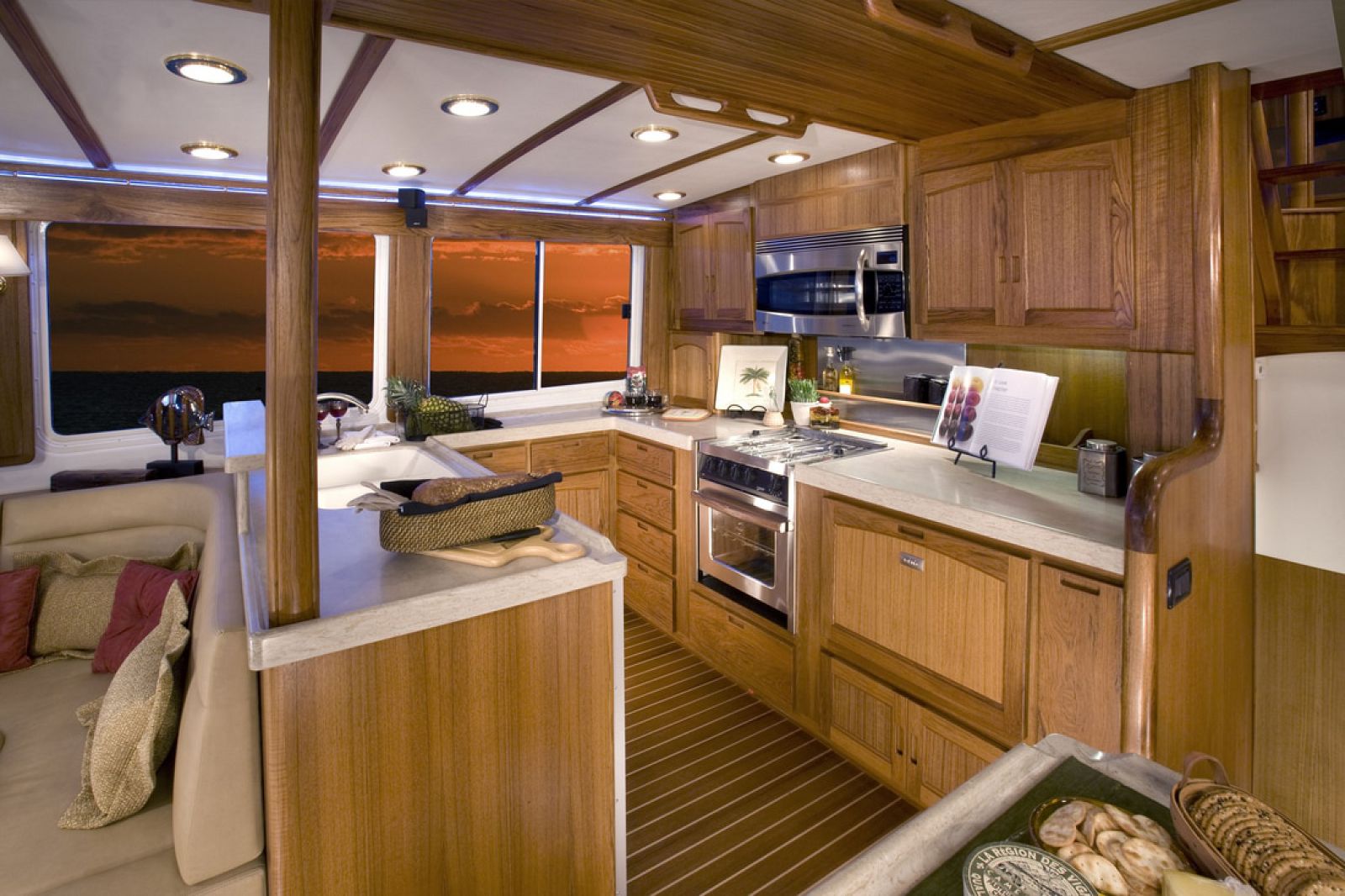 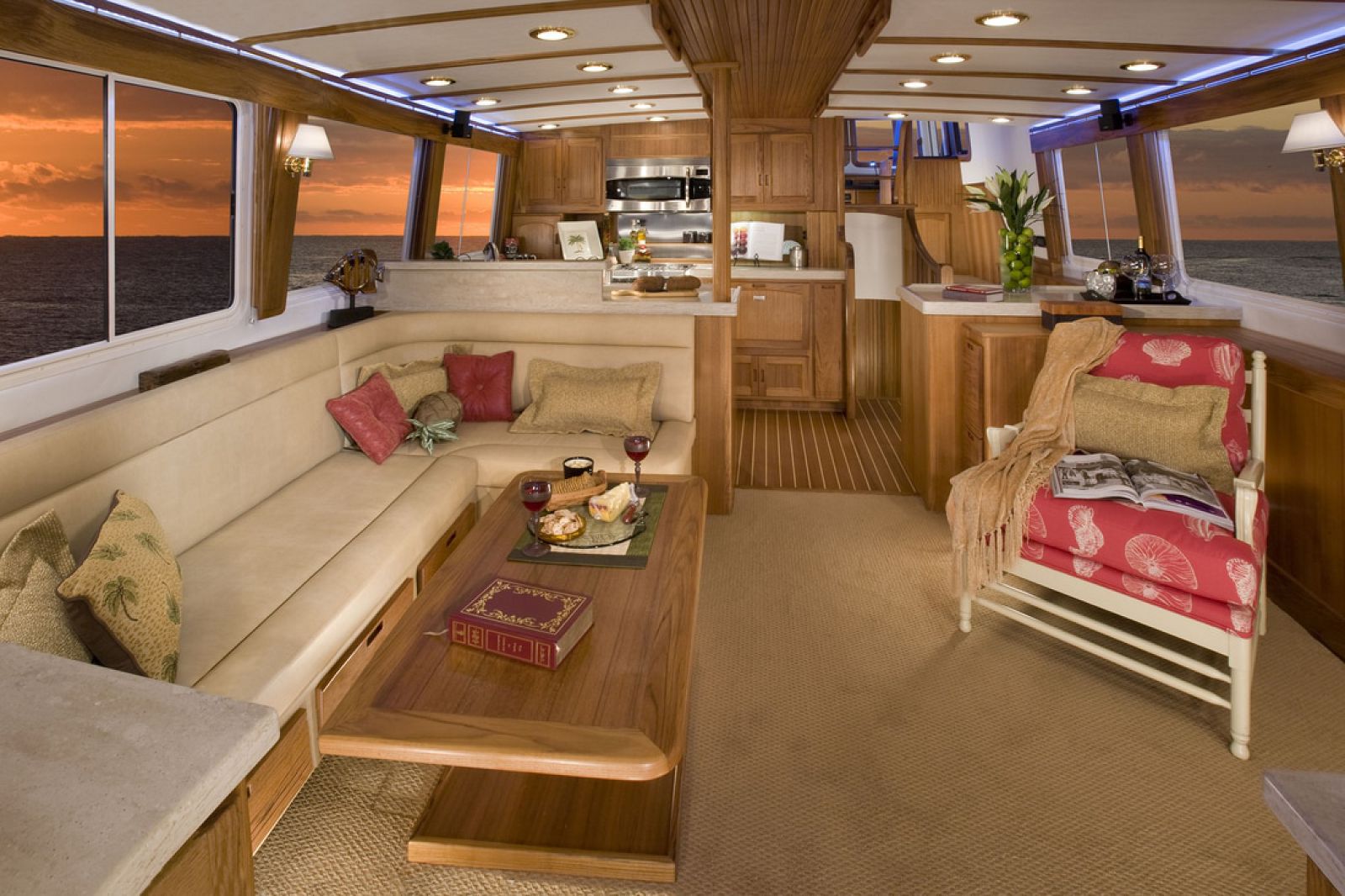 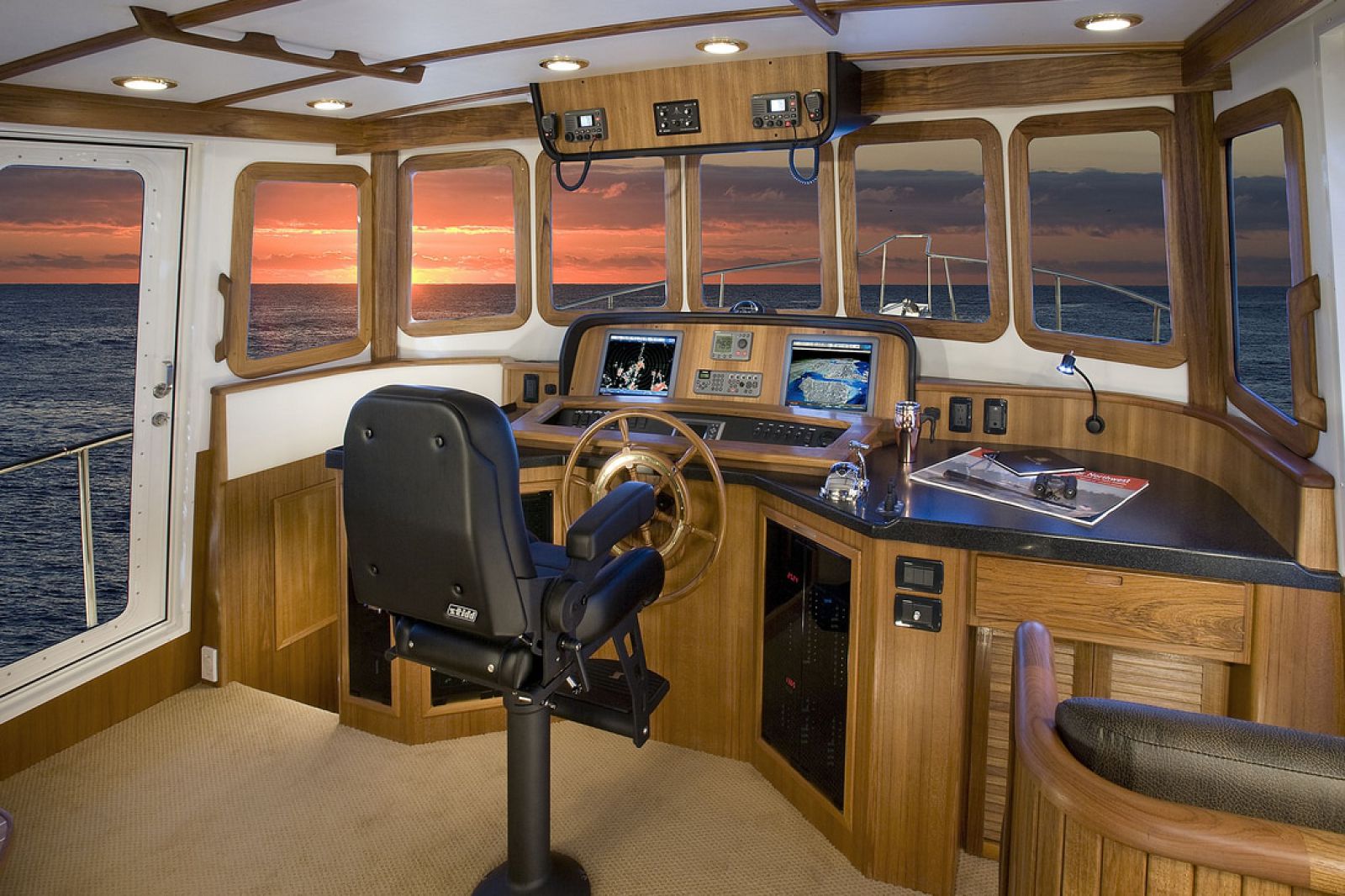 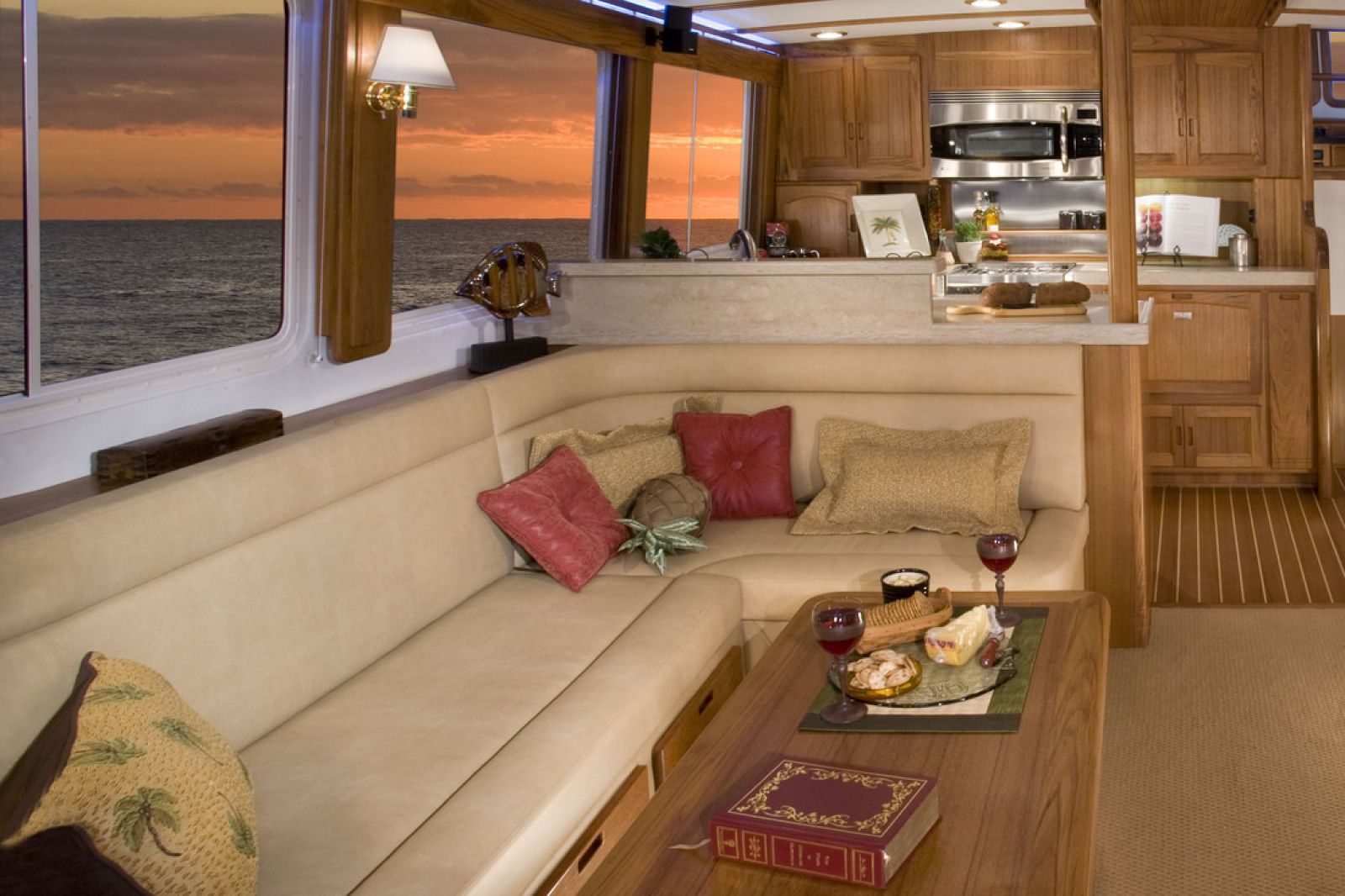 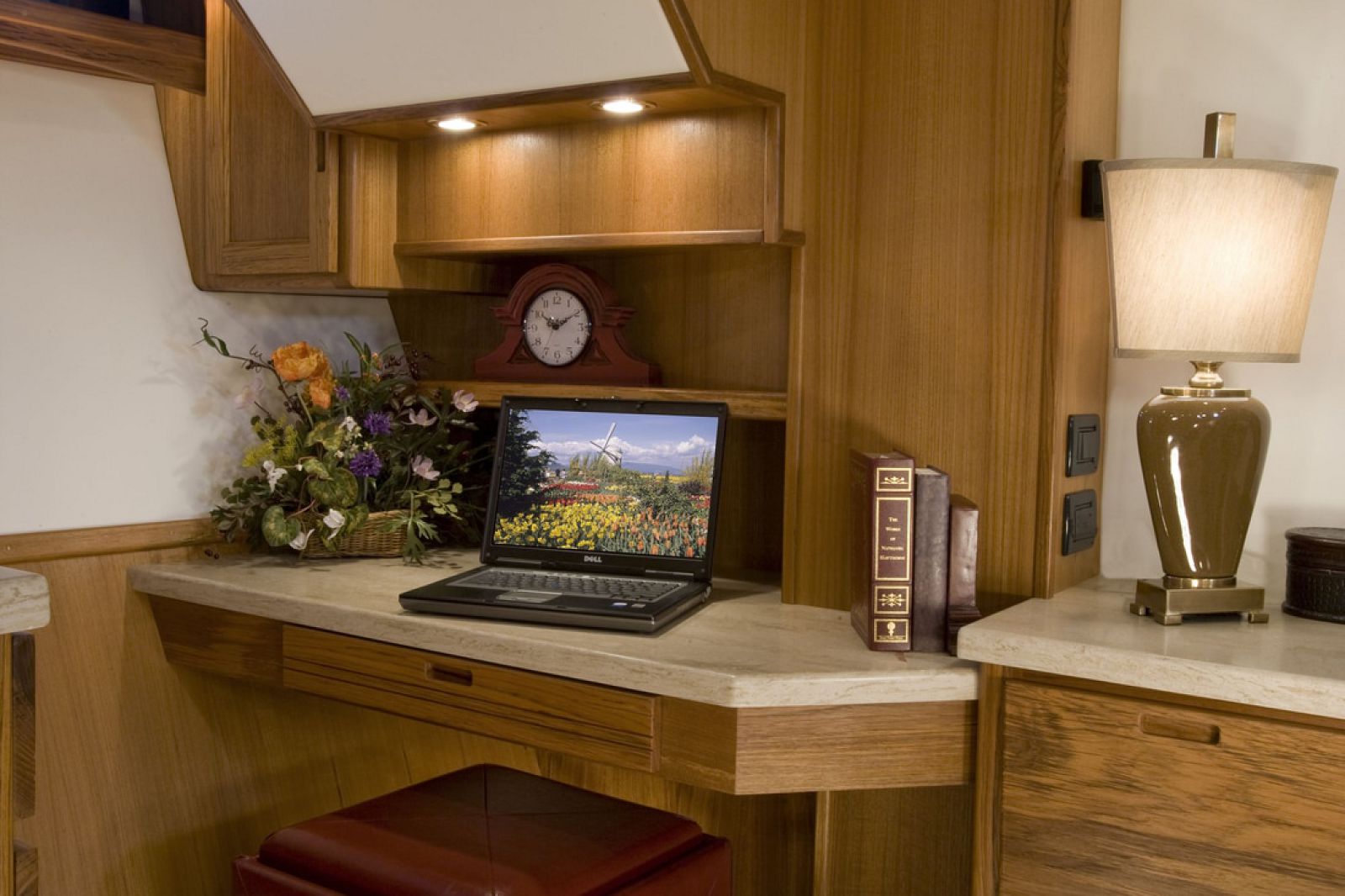 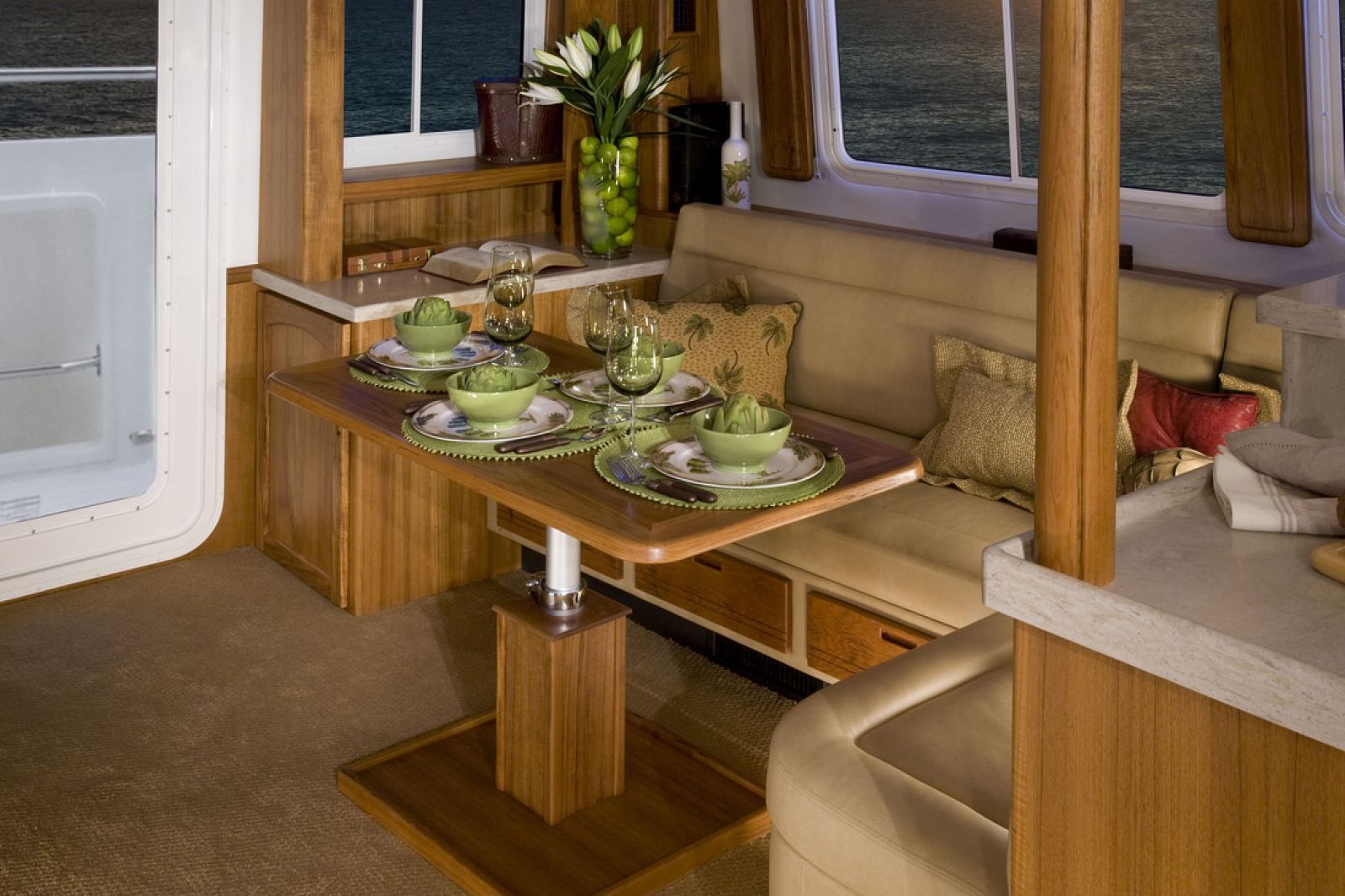 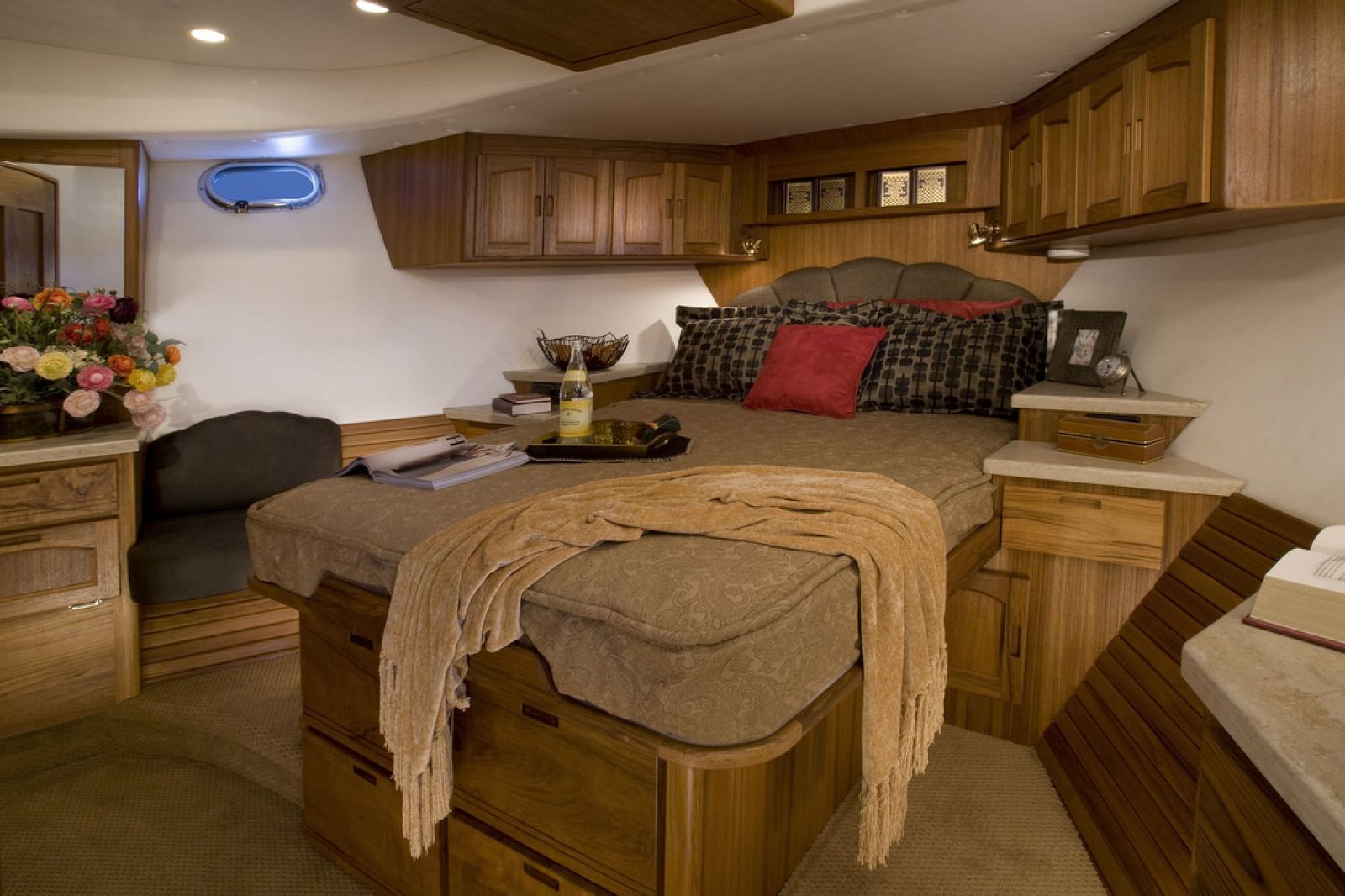 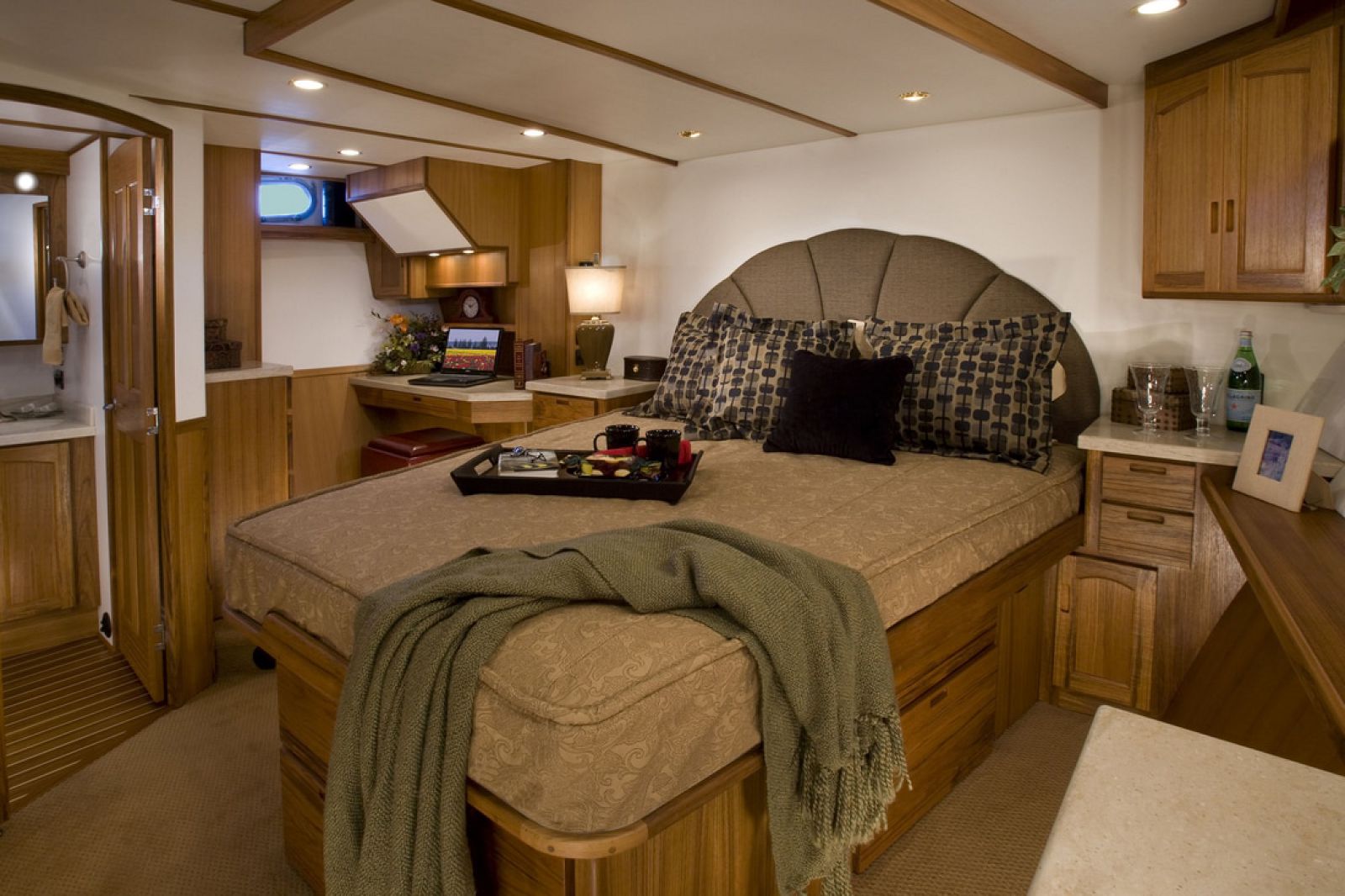 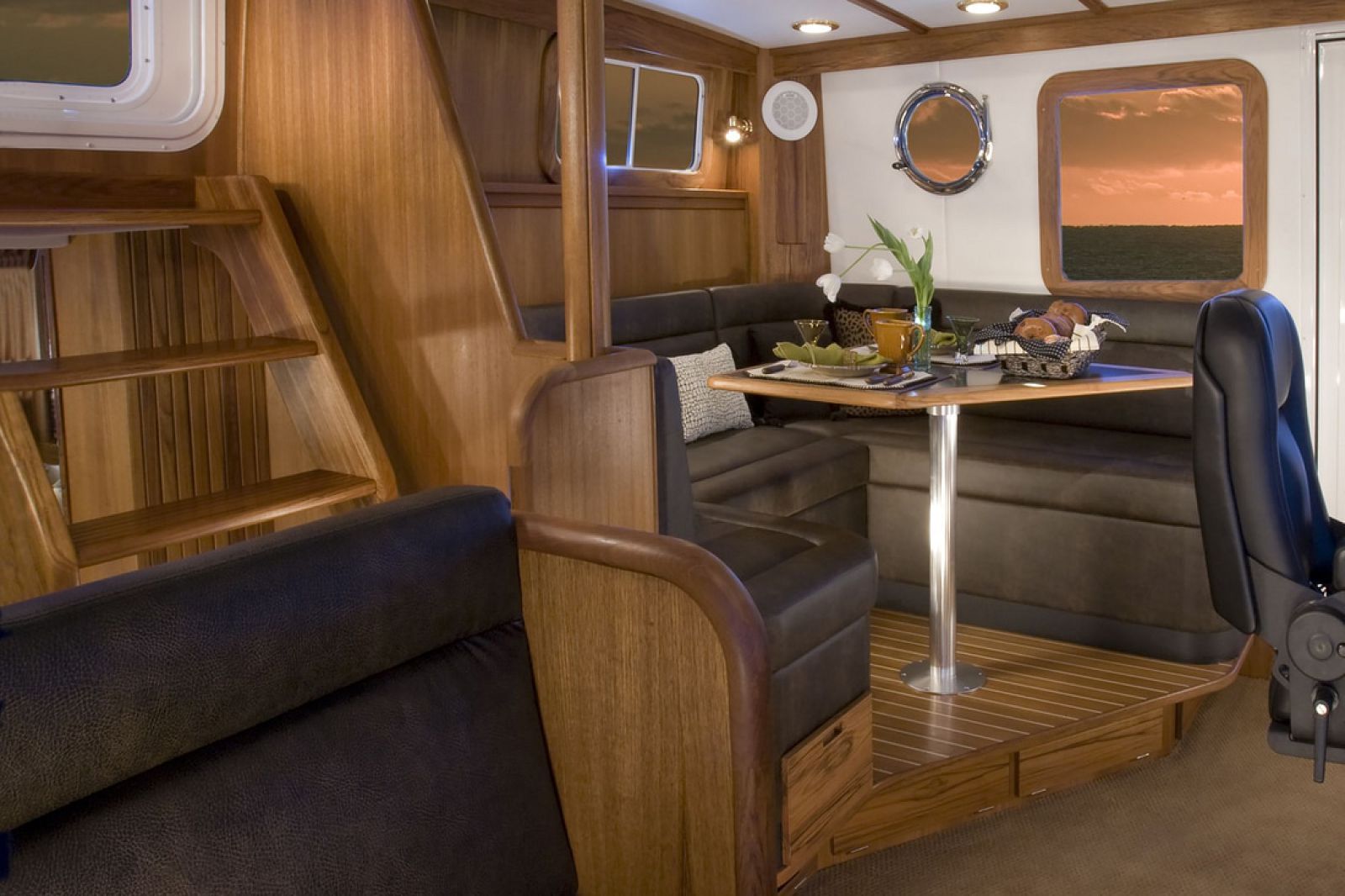 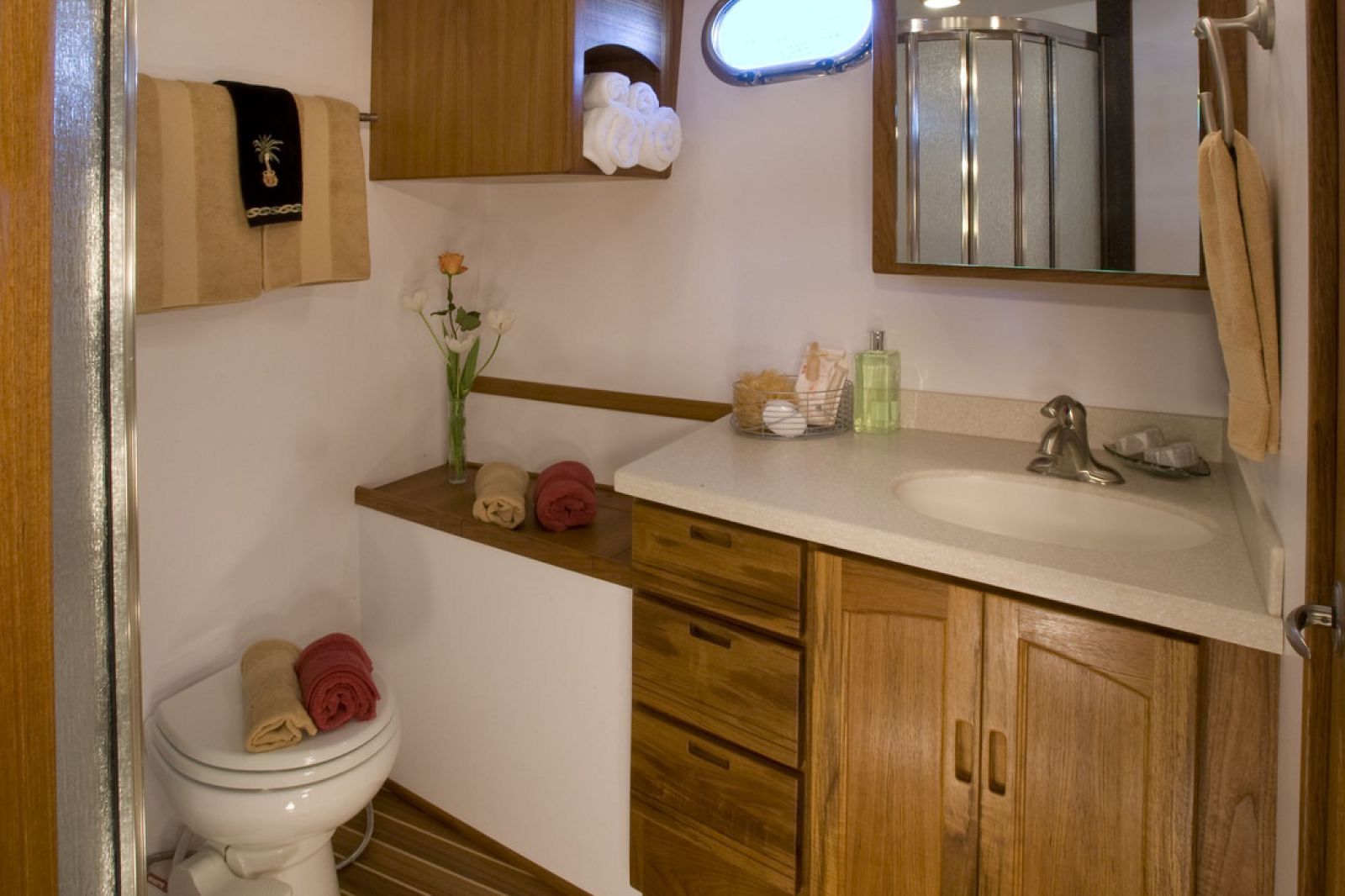 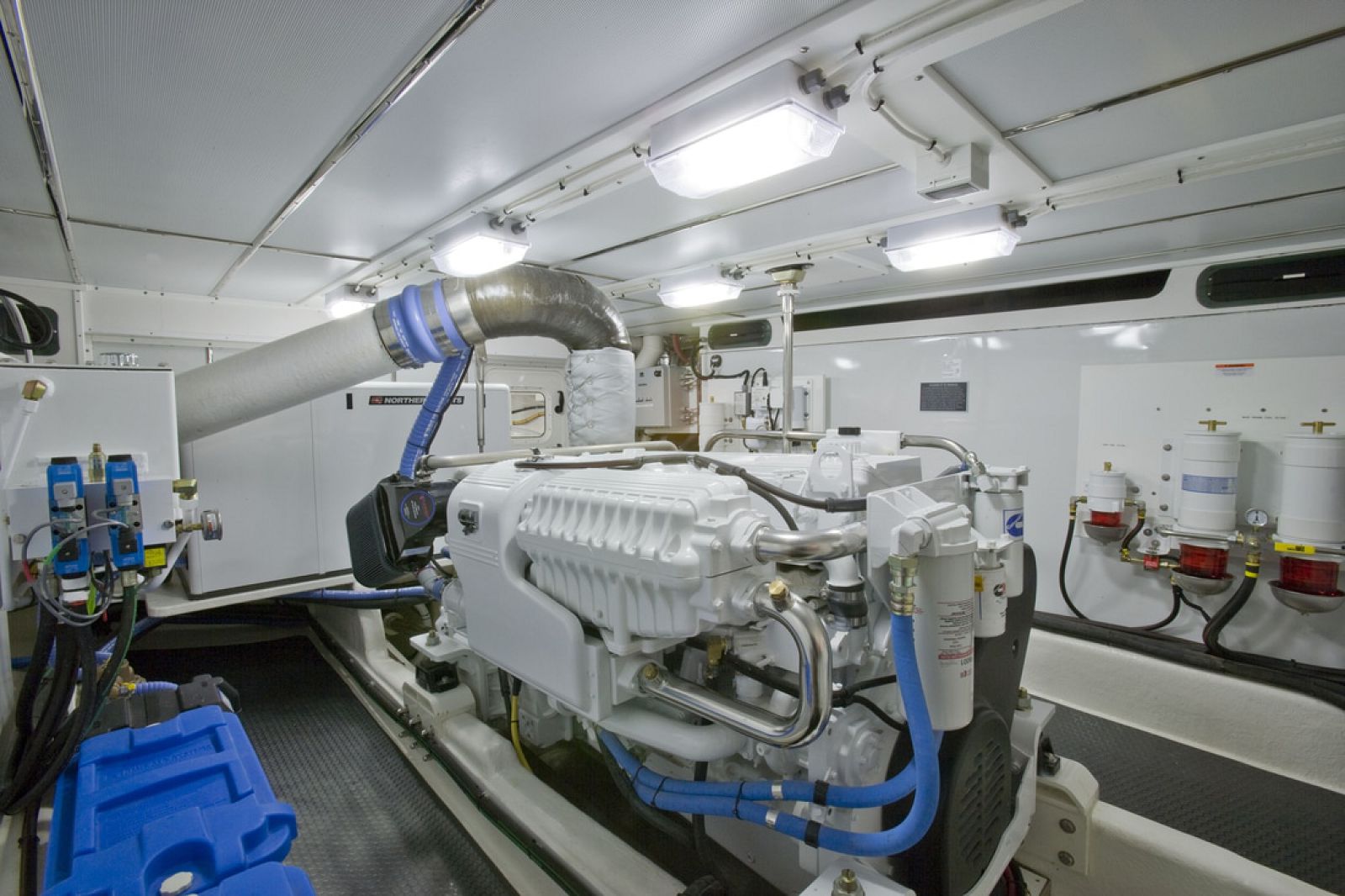 Get more information on the Nordic Tugs 54

In 2004, Nordic Tugs launched the Nordic Tug 52. She was the largest tug yacht from the builder and proved to be an exceptional cruising boat for extended coastal cruising. The first yachts were powered by twin engines and featured teak interiors with all the comforts one would expect from a large tug yacht.

The boat became the Nordic Tug 54 in 2009, the profile similar to the rest of the Nordic Tugs fleet, easily recognized as one of those salty and rugged tug cruisers. Not surprisingly, the aft cockpit is large and inviting, and her wide side decks allow easy movement from cockpit to pilothouse and bow. Line handling is not compromised on this boat.

The large saloon and galley are open and functional, with L-shaped settee on the port side, the opposite side is left open for either a couple of chairs or perhaps a recliner. A long, movable Hi/Lo table tucks neatly near the settee, and is the perfect setup to enjoy meals, play board games, or serve snacks and drinks. With such an open saloon space, crew will appreciate the security of the overhead handrails to help moving about under way. This feature is missing on many of today’s cruising yachts that have open living spaces, but the builders somehow forgot what life is like at sea. On this Nordic Tug, there is a fine balance between delightful open spaces and the essential need to have one hand on the ship as one moves about.

The U-shaped galley meets all expectations as fitting a yacht of this caliber. Long counter tops wrap the galley with extended stretches of usable workspace. The galley is equipped with a full-size electric stove and oven, microwave/convection oven, dual refrigerators and freezer, dishwasher, ice maker, and, of course, storage is impressive. The cabinets and drawers are of the highest quality. The drawers are built with full extension ball bearing tracks and push locks.

The pilothouse on the Nordic Tug 54 resembles what one imagines finding on a commercial tug or small ship. There are seven wraparound, vertical windows for unparalleled forward and side visibility. Running in a busy waterway, such as New York Harbor, great visibility is critical due to so many commercial and pleasure boats going in all directions.

In front and to the sides of the centerline helm and pedestal Stidd helm chair are counter spaces suitable for chart navigation and keeping a running log, and the large helm console handles any combination of multi-function displays and gauges. An observer seat on the starboard side of the helm chair is appreciated by crew conversing with the skipper.

Set behind the helm chair on the port side is a U-shaped settee and table for the off watch to sit comfortably and experience the day’s views through the large windows and the dual pilothouse doors. Access to the boat deck and optional flybridge is up a set of steps at the aft end of the pilothouse.

With so much hull space forward of the engine room, the accommodations on the Nordic Tug 54 will fit the needs of most owners. There is a standard two-stateroom layout with a full-beam midships master stateroom. A guest stateroom is forward in the bow. Each has its own ensuite head with separate shower.

A three-stateroom layout is offered for those needed more room for family members, and the master stateroom is forward in the bow, with two staterooms amidships, separated by a companionway. These guest or family accommodations share a common head.

Aft of the midships bulkhead is a Sapele access door into the ship’s utility room, a luxury on any yacht. The vented washer/dryer, dedicated freezer, water heater, and electrical panels are installed in this utility space, a nice benefit of a larger boat, keeping these appliances out of the living spaces.

A locking, weathertight Diamond Sea Glaze door provides entry from the utility room into the engine room. This is an outstanding feature that not only isolates engine room noise and heat from the accommodations but allows someone to clean hands and parts in the utility room before walking back out through a stateroom or companionway.

The engine room on the Nordic Tug 54 is as nice as one can expect on a large cruising boat. It is well lit throughout, and the space is intentionally uncluttered and open so one can move easily around the main propulsion engine. Fuel system filtration and transfer plumbing is within reach and no gymnastics are required to service or inspect the machinery in this insulated engine room. Strainers are located for easy access, and there are stainless steel handrails alongside the engine to protect crew working at the fuel system manifold.

A second Diamond Sea Glaze locking door connects the engine room with the lazarette, where the steering gear is fully accessible. There is even more storage in this space.

The Nordic Tug 54 cruises economically at 9-10 knots, and with its semi-displacement hull, can be pushed to 15 knots when getting there is more important than fuel economy.

This flagship tug represents all that Nordic Tugs has learned from designing, building, and cruising its boats since it first began building tugs in the ‘80s. Hundreds of tug yachts later, with input from its fleet of owners, the company will be proud to build your own flagship, and show what can be created when the canvas is a 54-foot hull.

The Nordic Tug 54 appeals to those who want a larger cruising boat with accommodations and systems for maximum comfort, safety, and elegance, and a performance capability that is not possible in a full displacement trawler yacht. In other words, they want it all.

The Nordic Tug 54 is the ultimate cruising experience from Nordic Tugs. Proudly made in the U.S.A. 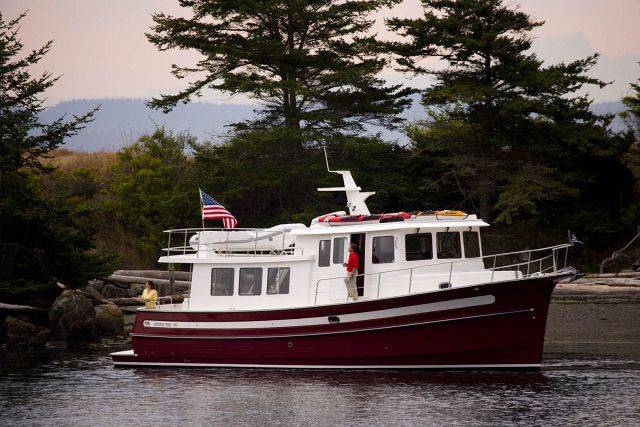 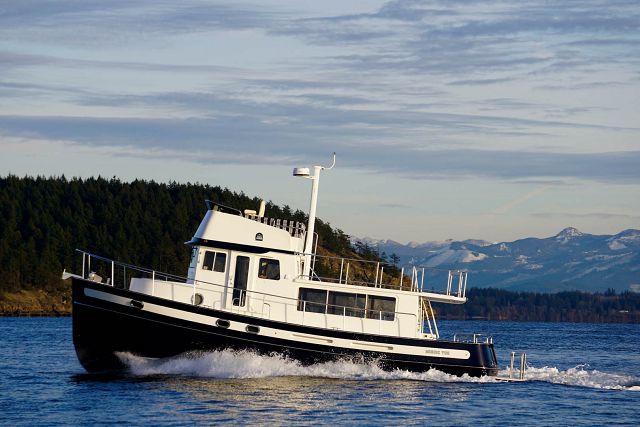 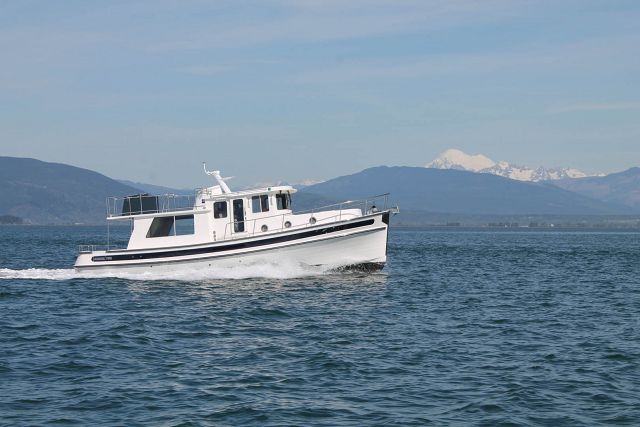 BACK TO NORDIC TUGS YACHTS