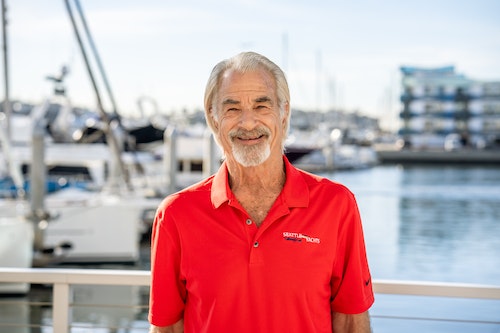 Nathanson began his yacht sales career in 1984 and has delivered numerous new and previously owned vessels over the years, many of which are still being enjoyed by their original owners.

The journey of locating the right vessel for the individual needs and taste preferences of each client is most satisfying, and has created true friendships from individuals who began as clients. Negotiating the right price, locating a proper berth, assisting newcomers in the operation of their vessels and advising in proper maintenance programs are all part of the job.

Nathanson moved to Southern California in 1974 and immediately took to the boating lifestyle, living aboard in Marina del Rey. Having an interest in classic designs and wooden boats, Nathanson has owned Malobi, a 40-foot Kettenburg, as well as a 44-foot Island Clipper built by Fellows & Stewart and a 36-foot Ohlsen Yawl built in Sweden. He presently lives aboard a 44' Marine Trader trawler in Marina del Rey. He has served as rear commodore in the Wooden Hull Owners Association for five years and was race chairman for the One More Time Regatta on Santa Monica Bay.

His daughter Taylor and grandson Wyatt and son Dylan and grandaughter Harlow both
live in Whitefish Montana, They have enjoyed summers growing up at Catalina Island.