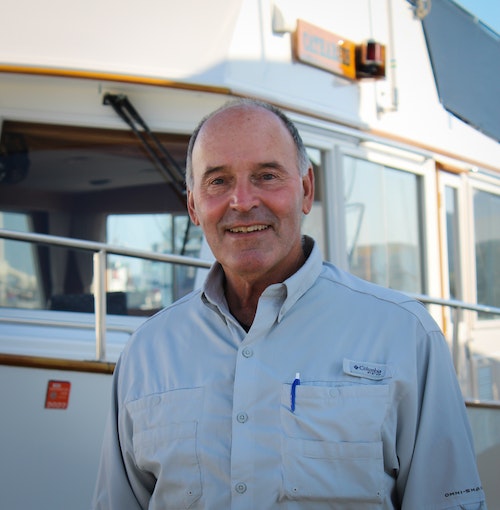 Jeff’s father, Walt, had a serious boating problem. Accordingly, Jeff got his sea legs early in life and hasn’t strayed far from the waterfront since. Born and raised in Southern California, Jeff relocated to Anacortes in 1990 to raise his family and continue his career in the recreational boating industry. Today, Jeff is a USCG 100 ton near-coastal master, an ASA certified power and sailing instructor and a USSA marine surveyor. He has spent over 40 years working in the recreational boating industry, including 21 years with bareboat charter fleets & sailing schools in California, Washington and the Virgin Islands. He has been selling Nordic Tugs and many other designs since he joined the Skipper Cress brokerage in 1995. He also serves as a personal yacht trainer which allows new captains and crew to gain confidence in docking, anchoring, yacht systems management and navigation. An active boater, Jeff has owned 10 boats ranging from 26 to 46’ which were upgraded and cruised with his family. He has completed a one year South Pacific cruise, an 11 month honeymoon cruise from Detroit to Tampa and a 3.5 year Caribbean cruise with his wife Kris and three of their four children. Currently, the Gleckler's are winter boaters in SW Florida and the Bahamas aboard their 41’ Morgan Classic sloop. Jeff enjoys sharing his boating experience by assisting others acquire the right boat so they can head for the horizon and create their own adventures. Like his father, Jeff has a problem….