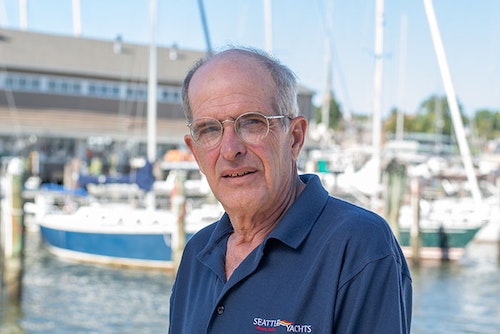 Dan is a lifelong Chesapeake Bay boater and enjoys both sail and powerboating. Currently, Dan is sailing a 36’ Cape Dory cutter. His marine industry experience spans over 40 years, working daily with boaters in marinas, boatyards and yacht sales. Raised in Annapolis, Dan started boating at the age of four when his parents purchased their first sailboat. Since that first sailboat there have been many family owned sailboats, trawlers and motor yachts from 30' to 73' His teenage years were spent in AYC Junior Fleet and sailing both a Laser and an 18’ Catboat in Whitehall Bay. In 1980, his family moved to Gloucester Point, Virginia when they purchased York River Yacht Haven. York River Yacht Haven grew over the years to become a full-service marina facility. It included 325 slips, a working boatyard, a ships store, yacht sales, an oyster farm, and a restaurant. Over 33 years Dan actively managed every individual department and was the General Manager for many years.

When the marina was sold in 2013, Dan came back to Annapolis to work doing what he enjoys the most- working with both boat buyers and sellers to fulfill their boating needs as a yacht broker. His other interests include Chesapeake Bay Restoration, Aquaculture, Oysters and Developing “Sustainable Working Waterfronts”. In pursuit of this passion, he served on the Dean’s Advisory Council for Virginia Institute of Marine Science for a term of 8 years. Working with the Army Corps of Engineers, York River Yacht Haven’s aquaculture division grew (under the marina piers) over 15 million oysters, which were used to seed restoration oyster reefs in the Great Wicomico and Lynnhaven Rivers. As a result of growing oysters within the marina, something unique was achieved- the marina had a positive environmental impact. This is still a passion of his. Welcome aboard Dan!