In its broadest sense, the term “cruiser” or “cruising motor yacht” refers to pleasure vessels that are intended and have the capabilities to travel reasonably long distances while providing all of the amenities of comfortable day-to-day living to their passengers and crew. Our specialty is helping customers in the purchase or selling process of cruising boats and yachts of all types, sizes, and price ranges. Our team of expert, professional yacht brokers are cruisers themselves with thousands of nautical miles in their collective experience.

Beyond that, cruising motor yachts come in many different sizes and forms, from smaller yachts that were typical of brands like Sea Ray. Meridian, Carver, and Chris-Craft to mid-size motor yachts like Tiara, Hatteras, and Ocean Alexander, and up through the megayachts and superyachts such as Burger, Benetti, and Heesen.

All cruising motor yachts share a common emphasis on providing a level of living comfort while underway and in port. Megayachts and superyachts are motor yachts, just larger and more luxurious than the norm. At one time, a 75-foot yacht was a “really big” yacht. Then, in the 1980s, motor yachts in the 100- to 200-foot range, dubbed “megayachts”, became more common. And in the latter part of the 20th century, we began to see more and more yachts 200 feet and longer — until today we see yachts being built that are 400 feet LOA and larger. These latter vessels have come to be known as “superyachts”.

The important fact to understand, when considering what type and what size yacht to buy, is that cruising motor yachts are like houses when it comes to day-to-day living — some people can live comfortably in very modest surroundings, while others require significantly more space and radically more elaborate accommodations. And what you get in those respects is, all other things being equal, only as much as you can afford to pay.

What differences do you find between a “cruising yacht” and an “expedition yacht”?

Cruising means different things to different people. Consequently, so does the term “cruising yacht”. However, as mentioned above, in its broadest sense, a cruising yacht is a pleasure vessel that incorporates a significant level of interior accommodations, as well as enough capacity for fuel and freshwater to make some longer trips possible without seeking refills of either. An “expedition yacht” is, on the other hand, a vessel that is (also) suited for long open-water passages and extended trips to remote, less-developed areas of the world, where support services are scant. Consequently, a sharp demarcation does not exist between “cruising” and “expedition” yachts, but rather they exist on a continuum which has short hops and brief periods of liveaboard at the one end and long, open-water passages and extended times away from the support of industrialized society at the other.

Why not just buy an expedition yacht and have the toughest, longest-range vessel available?

In a word, cost. You must pay for long range and the ability to travel to remote areas of the world where you’re pretty much on your own for extended periods of time. Either that or trade off other features that would otherwise enhance your enjoyment of your yacht is she were better suited to cruising alongshore or island hopping — if that’s what you’re going to use her for.

There’s a lot of talk in yachting circles about finding “the perfect yacht” but the fact is no yacht is perfect for all reasons and all people. The key is to look for a yacht that’s perfect for you and what you plan to do with her. And assuming your budget is finite, the way to do that is to pay for what you need to satisfy your needs and requirements and not end up paying for features you will never make use of. Which is one reason to employ the help of a professional broker or yacht sales advisor.

I see some yachts advertised for sale as “sportfishing yachts” or “convertible sportfishermen”. I don’t want to fish, but could one of these be used for cruising?

The short answer is yes, albeit with some qualification. Indeed, some yachtsmen who rarely if ever fish, in fact, prefer to cruise aboard the kind of yacht nominally classified as a sportfishing vessel.

Convertible sportfishing yachts generally have a deck layout in which a much larger proportion of space is given over to an aft cockpit than in the average motor yacht. They are also, in general, fitted with a more elaborate flybridge deck, sometimes enclosed and climate-controlled, but more often open to the weather. All of which combines to create a vessel that is well suited to the semi-tropics where those aboard tend to spend more time on deck, both when operating the vessel and when lounging, relaxing, and cooking.

As well, sportfishing yachts will usually have one or even two fewer staterooms or sleeping cabins than a motor yacht of the same overall size. And they may incorporate more casual inside cooking and dining layouts, for example, a country-style kitchen (galley) that is open to the saloon area. Against that, sportfishing yachts often have larger engines and fuel tanks for better range and higher top speeds than motor yachts of roughly equivalent size.

But the bottom line is that, if you tend toward an active, outdoor lifestyle and intend to spend significant periods in more temperate climes, even the sub-tropics, then you might find a “convertible” sportfishing yacht more suited to your tastes and requirements for cruising than a more conventional “sedan” style motor yacht.

How many staterooms should a cruising motor yacht have?

The obvious answer is as many as you need. Which, by the way, is not the same as the number you may think you want.

Again, unless your budget is effectively unlimited, every stateroom you have detracts from the floor space and volume of the common areas of a yacht, both interior and exterior.

I’ve seen a few sizable cruising motor yachts that had only a single stateroom. And in such cases, guest sleeping accommodations were provided in the form of a convertible sofa or two in the yacht’s common area.

The theory behind that kind of layout is that sleeping accommodations for two or even four guests is an occasional need and not one for which the yachts owner(s) want to give up serious spaciousness in the yachts other living spaces for the sake providing a guest stateroom or two that will only be used, perhaps, 10% of less of the total time the yacht is in service. 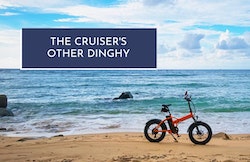 Many yacht owners are turning to electric bikes, or E-Bikes, as a way to enjoy the city while docked at a marina. 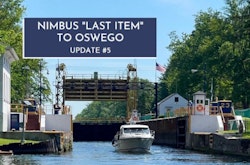 Follow along as our Nimbus owners travel the Great Loop. This week it's on to Oswego. 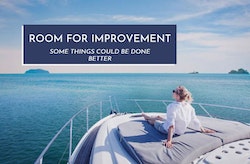 Here are some things I'd like to see done better in boat design.