As often happens, all sorts of factors and events bring unexpected elements into bright focus. The latest is the convergence of the Annapolis Boat Shows, our friends’ decision to move into managed living, numerous yacht club acquaintances coming to the Dark Side after this summer, and our own efforts to downsize our living situation. All are unquestionably related, or so it would seem when I look back at all the overlap.

Each of these events, except for the boat shows, involved looking over one’s stuff, and the weighty resolve to go through one’s possessions, clean out where necessary (which it all is), and ultimately shed stuff that does not warrant coming into the next chapter of one’s life. Where there is no room for Russian nesting doll collections, memorabilia from Vietnam, or board games with history that span the last 100 years.

It is no surprise to most today that the next generation does not want our possessions, basically none of it. They say no to furniture, what was expensive tableware and China, exotic furnishings and rugs from the Orient, or our garage and basement full of boat stuff. They want none of it. Period. Sorry Pop Pop.

That leaves most of us at some point needing to make decisions for which we are ill prepared. How does one part company with something that originally cost a great deal of money, had a life-or-death purpose to keep us safe, brilliantly served us through thick and thin, and yet now does little besides take up space?

Need an example? How about a gorgeous Cassens & Plath Ultra sextant (below), complete with certificate of accuracy and beautiful wood case. It represents the best of the best of the tools of celestial navigation, but whose time has come and gone, at least for this aging sailor. Or the Lokata 7 RDF that safely brought us straight as an arrow towards Bermuda’s Gibbs Hill radio station. And which has not moved an inch over the last 30 years. It still works, of course, which only makes matters worse.

Equipment designed and built before the age of obsolescence is particularly hard to part with. I have, among other VHF handheld radios, a Standard Horizon HX350S radio, a gem of a radio that fits so well in my hand, a great tool for communicating between ships, shore, and all the other uses of a modern marine VHF radio. I remember a Bay pilot telling me he hoped the HX350S would stay around forever, as it was the perfect balance for someone who keeps a handheld VHF at his side as part of his profession, for hours on end. He would keep this radio forever, or so he hoped.

Unfortunately, the NiCad battery has lost its ability to hold a full charge, and that makes it difficult to justify as a primary radio. I tried to find a replacement battery, but I am out of luck. No wonder. I looked at the manual for the radio and saw that it was printed in March of 1999. Hmmm, a bit dated? 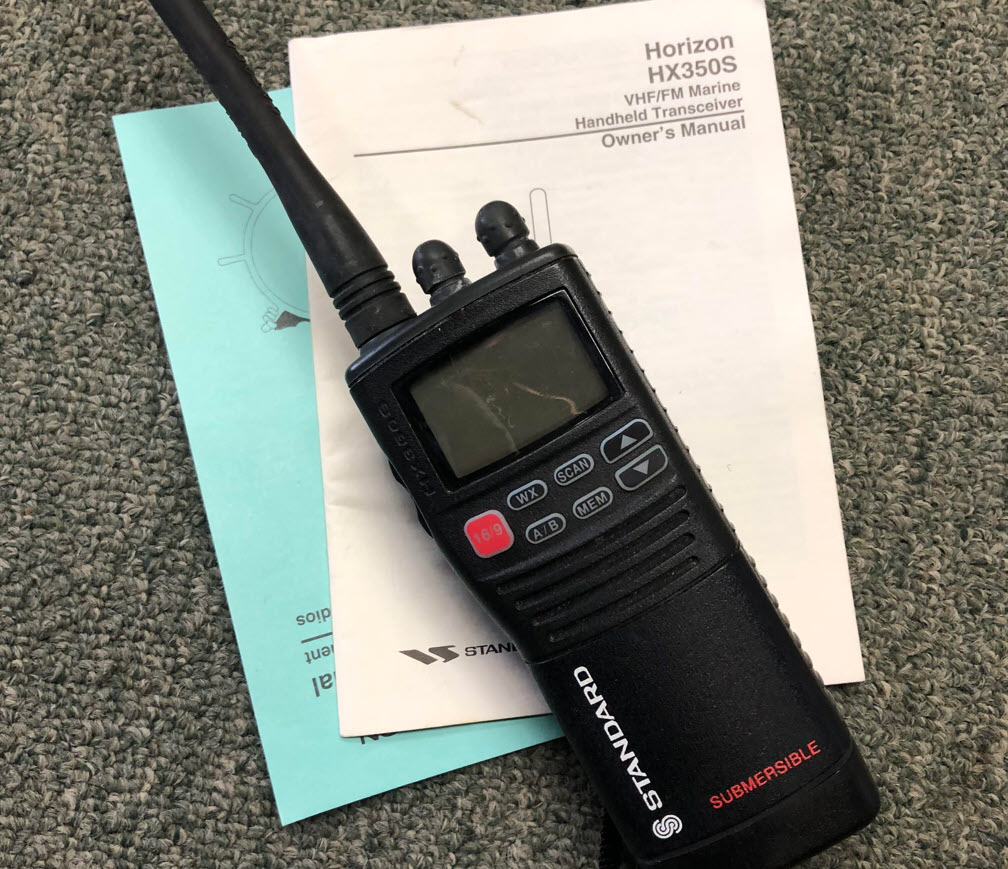 I did find online that there is a cottage industry that replaces obsolete batteries for a charge. One sends in the old battery case, and for $70 they will install a fresh set of NiCad batteries, which keeps the radio operational for a while longer. Sounds like a possible solution, I suppose, but it also gives me pause.

A brand new, current Standard Horizon VHF radio, with more features: GPS, AIS, and a lithium battery, now costs under $150, and some models even contain an FM radio receiver. All float and are waterproof. Is spending $70 a justifiable solution to prolong an obsolete piece of gear, no matter that it works flawlessly, has a heft that feels great in one’s hand, and brings confidence because it is so well done?

Given that I have three other handheld radios, all newer vintage and all work fine, why keep the past going?

Many of the people coming to a cruising powerboat from a sailboat don’t realize the dynamics of what they are going to experience making this transition. No longer will they require that superb foul weather gear to stay warm for days in a wet cockpit and which were once considered absolutely required. Need more examples? Did you ever hear of a Walker Knot Log (seen below) to measure the distance traveled in a sailboat? A purely mechanical device, it involves towing a spinner that measured distance with a bit of rudimentary math. And don’t you dare forget to buy a spare spinner! Folklore has it that sharks eat them regularly. (Although I never knew that to happen to anyone…) 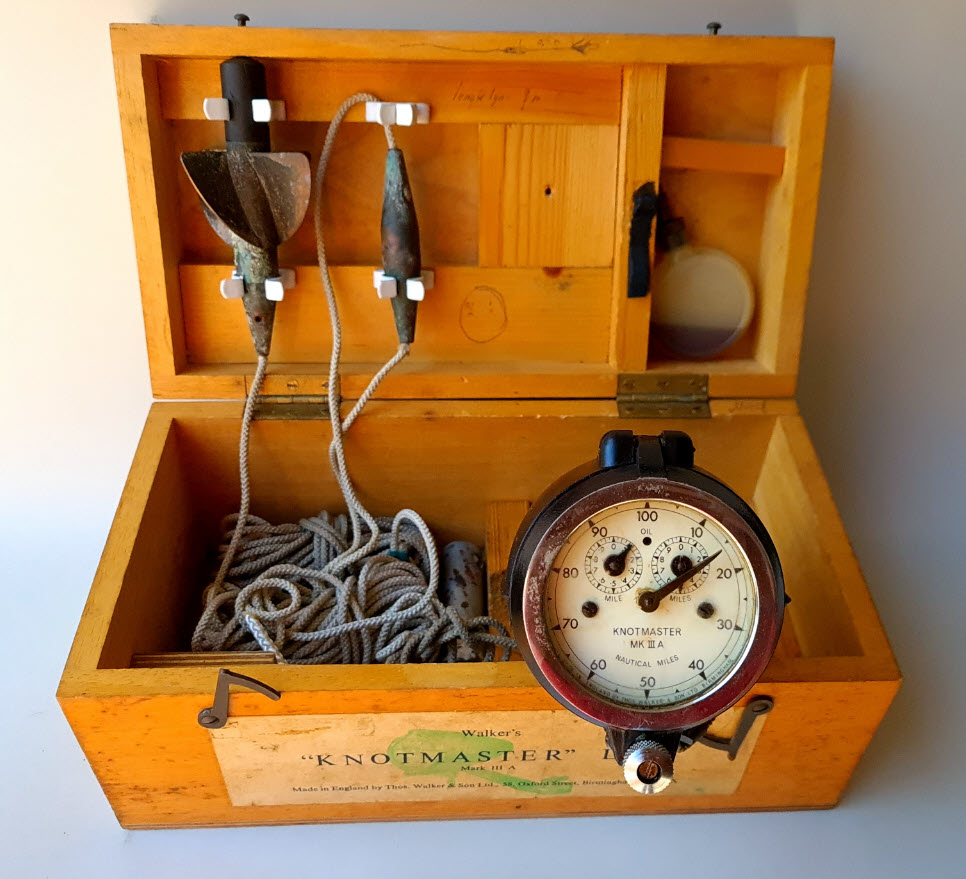 The massive, breakdown Luke anchor to store in one’s bilge was another necessary requirement for a fully found sailing vessel. Anyone ever use one? Not that I heard.

The same goes for buckets of anchor chain, and anchors of various sizes and designs. You still have that crusty old CQR, don’t you? All these things wind up in the garage or storage space, ready for your next circumnavigation, whether real or imagined. So, when one buys a trawler, or moves into a different living situation, or simply desires to live a simpler life with less stuff, it must all be dealt with. And the reality of what you’ll see at the boat show proves just how absurd keeping all this stuff is. Spend ten minutes in the Harken booth at the show, and you will seriously wonder why you still have all those outdated Ronstan and Schaefer blocks and hardware that you thought you might need on a new boat.

Longtime sailors and boat people have tons of these things in their possession. Seeing what’s new at the boat show only highlights the folly of keeping any of it around, never to be used, ever.

The world has changed and so must we. Whether you continue to sail the world or cruise the coast on a trawler, where the destination is now more important than the journey, there comes a time to embrace that the truths of our youth don’t fit the reality of today.

I just attended a boat show reception of the Ocean Cruising Club in Annapolis. The members of this organization are serious bluewater cruisers, and many have circumnavigated, some more than once. It is a most impressive group of people from around the world.

Yet, a casual inspection did not reveal a single Rolex Date Submariner among them. Every person that I saw has a smart watch, an Apple or some other brand of the ubiquitous, square computer one wears on the wrist. Robin Knox-Johnson was not there, so my results might be skewed a bit, but today’s bluewater cruisers, even those pushing 80 years, or more, are on board with modern technology, and all that it brings to the cruising experience.

I already mentioned foul weather gear. How pathetic to go through THAT closet! I have foulies that I wore in the 1986 Annapolis to Bermuda Race. 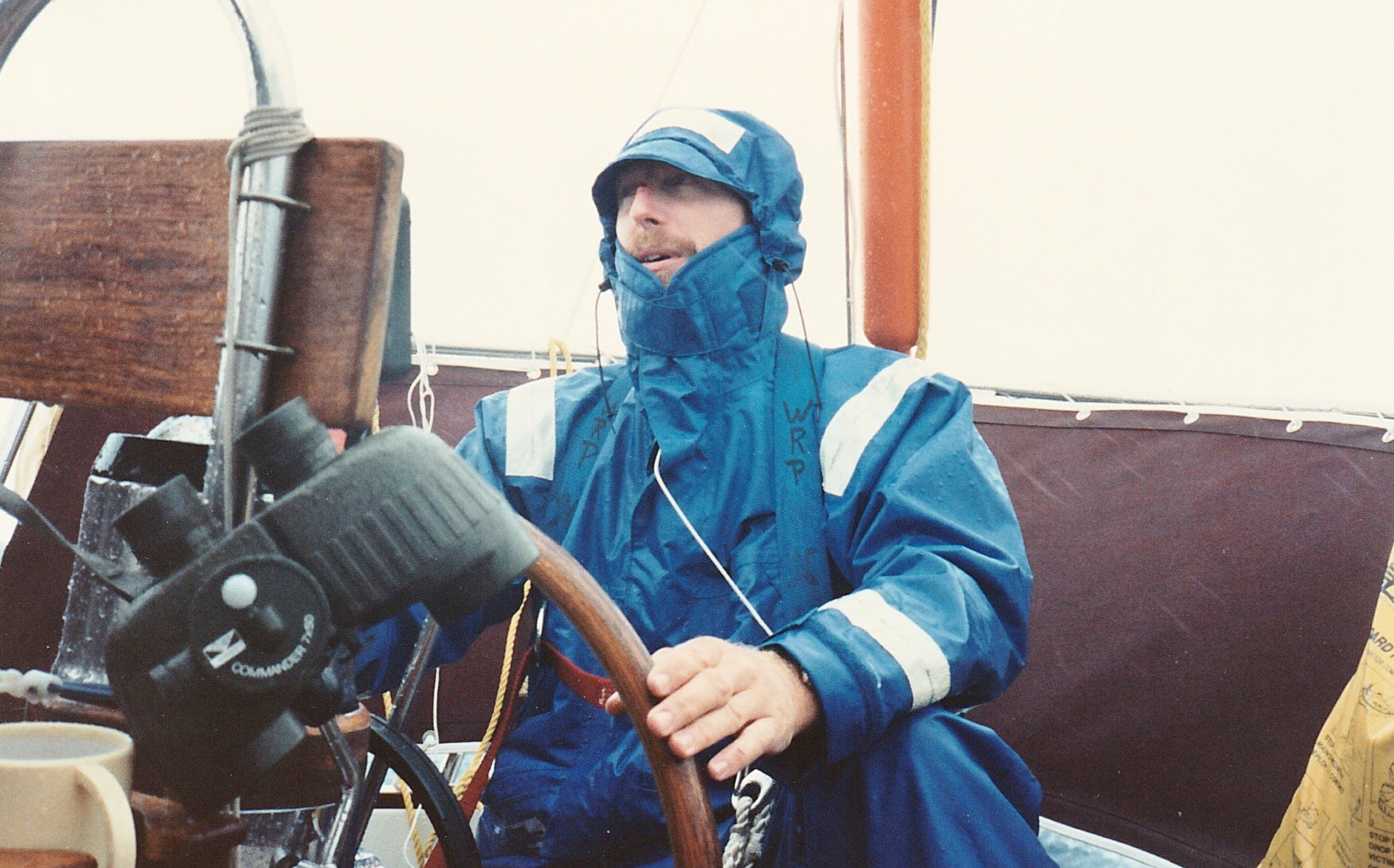 Why do I still have those Henri Lloyd pants and jacket, neatly on hangers in my closet??? I recently retired a Marmot mountain parka I bought in Seattle 35 years ago, and which I have worn religiously every year since. I refreshed the waterproofing a couple of years ago, after I realized it leaked like a sieve.

Then one day I saw it in the bottom of the bathtub where I hung it to dry after a recent outing. The little tab on the collar to hang on the shower hook was still attached to the fixture, but the glue holding it onto the rest of the jacket had finally failed. My trusty red mountain parka. Your time is over, and I must part with you forever. That also fits most of my foul weather gear, long past its useful, waterproof life.

My closet was mostly empty when I finished getting rid of these once-cherished clothes, which made me sad. They somehow validated me as an offshore kind of guy, although I’m really a man who hasn’t used foul weather gear since coming to the trawler world decades ago.

I’ve been helping my friend go through his workshop, as he prepares to move back near family and an assisted living scenario. He has pieces of teak that probably outdate me, all neatly organized in size order. He won’t need any of it in his next chapter, yet it is hard to simply throw it out. Even a piece of ¾-inch Starboard is worth keeping, just in case…right!?!

A few of the people in my life are leaving boating for good, but the majority are just regrouping, downsizing, and developing a lifestyle more relevant to where they are now. A lock-and-leave home makes more sense for most couples who combine empty nests with wanting to travel more extensively, without the restrictions and shackles of maintaining residences. One British couple I know is soon headed down to Panama, and the South Pacific. The last thing they need is a large house back in England full of stuff that reflects their lives 25 years ago. They will go home to England on occasion, but only for doctor’s appointments and other business. They are living elsewhere nowadays.

Funny, how did I come to own seven pairs of binoculars? I still can’t get over how that happened. Well, my wife likes to quote some apparently well-known Japanese home organizer who believes one must first identify those possession one truly loves, rather than focus on what to get rid of. Somehow that must make it easier to cull through piles of stuff.

Okay, it is a no-brainer to keep the stabilized Fujinons, and I won’t part in this lifetime with my Zeiss binoculars. So, the rest is up for grabs. Maybe I’ll just leave them in the cockpits of pretty boats I see when walking the local marina. Make somebody feel like they are having a magic day.

Who knows? Maybe I’ll join the ranks of people who successfully shed that pile of personal history to keep only the stuff I really love. And what the hell. Getting to Bermuda is a lot easier now.

I hear they even have airline flights several times a day… 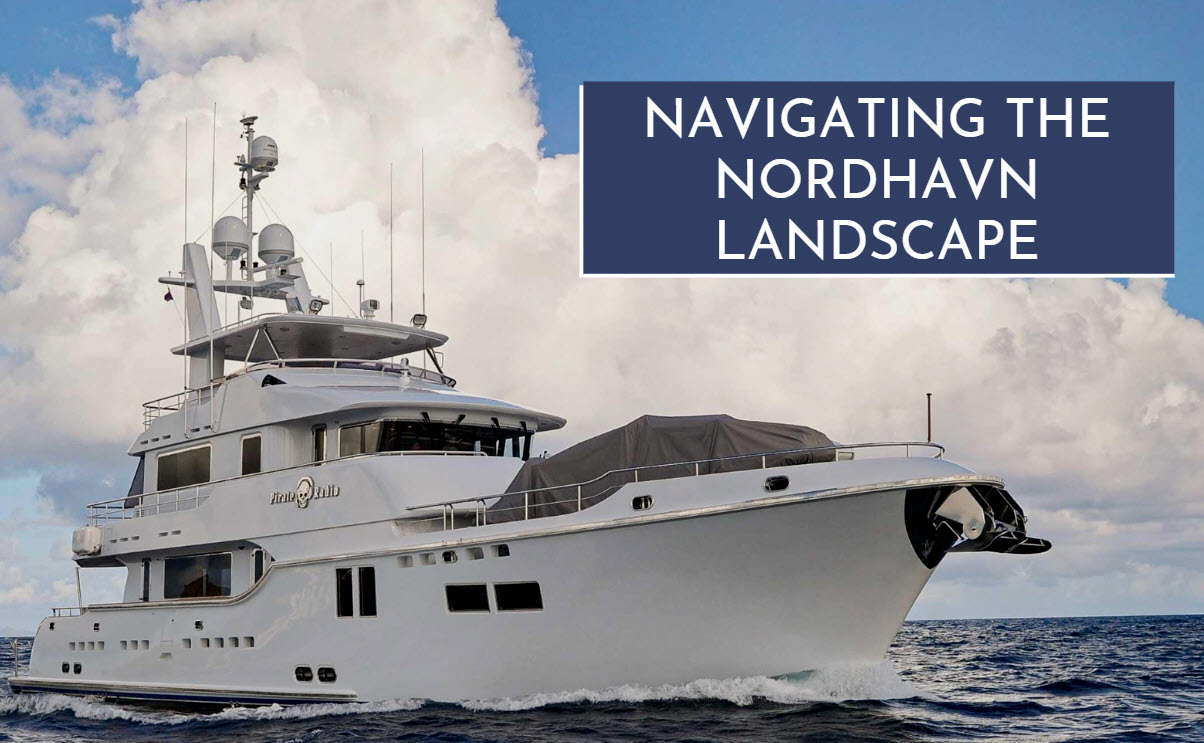 Are Nordhavn Yachts Any Good?