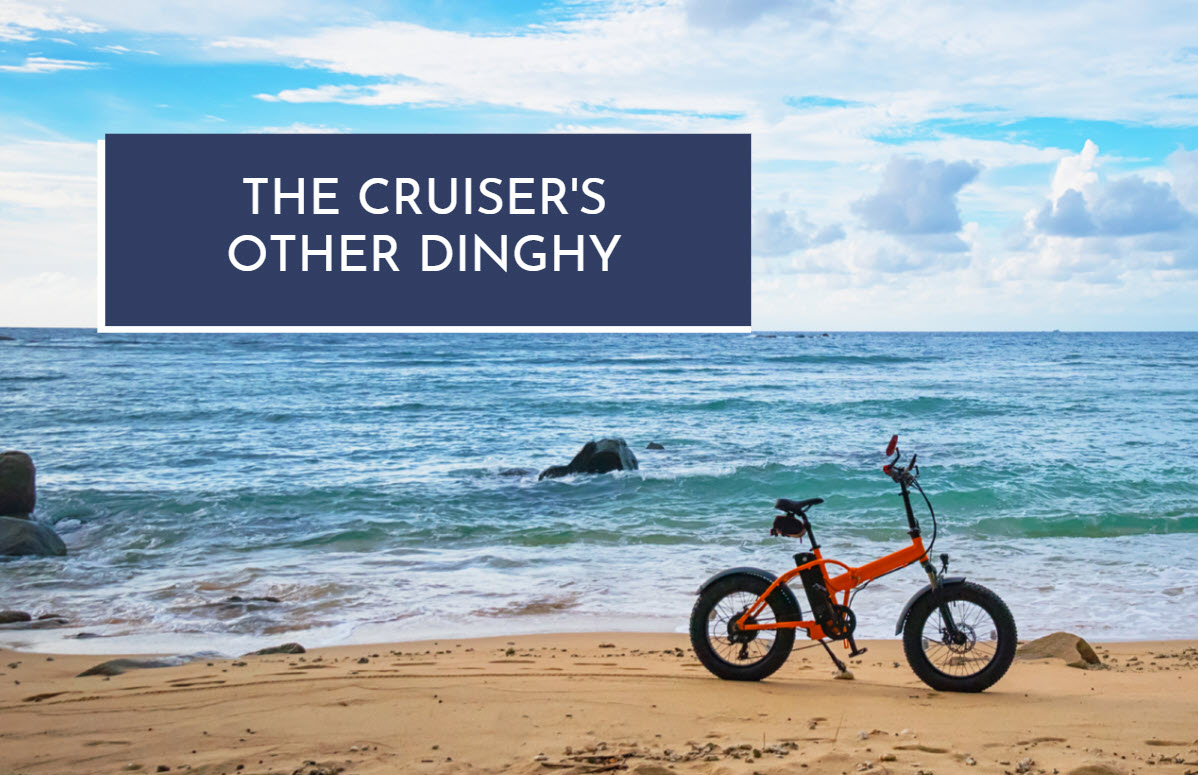 Back in the day, and I mean back in the 1970s and 1980s, the cruising scene was relaxed and typical Margaritaville, whether it was in St Micheals on the Chesapeake Bay, Marathon in the Florida Keys, Leland in Michigan, or Friday Harbor up in the San Juans.

A couple comes out of Publix grocery store in Marathon, for example, four or five plastic grocery bags in hand, and they stow the groceries in the pannier bags of their folding bicycles. In my mind, the man is always wearing those khakis with the zip off legs, and both are wearing Tilley hats. One can instantly recognize they are cruisers, wearing well-worn boat shoes, and she has a colorful ankle bracelet she bought in the BVIs a couple of years ago.

They each have folding bicycles, and more often that not, they were Dahon-like bicycles, marinized folding bikes with 20-inch wheels that were as ubiquitous with the cruising lifestyle as the Tilley hat.

Off they go, back to the marina, with perhaps a stop for ice cream. If they were going to stay in town awhile, they would chain and lock each bike, around a piling or the shorepower pedestal. Walk the docks in any cruiser-friendly marina, and one would see a number of these folding bikes.

Fast forward forty years, and the scene remains the same. But that couple now have more transportation options, with Uber and other pay-for-a-ride services, some marinas have loaner cars, and there are even local electric buggies to carry passengers where they need to go within city limits. (Annapolis is big on these electric taxis, super-sized golf carts and able to carry a half dozen people around town.)

But there is another option. The trusted folding Dahon Mariner is still available for those who want the flexibility of their own transportation, well suited to stow in a sailboat lazarette or the cockpit locker on a trawler.

(Seen below: The Dahon Mariner D8) 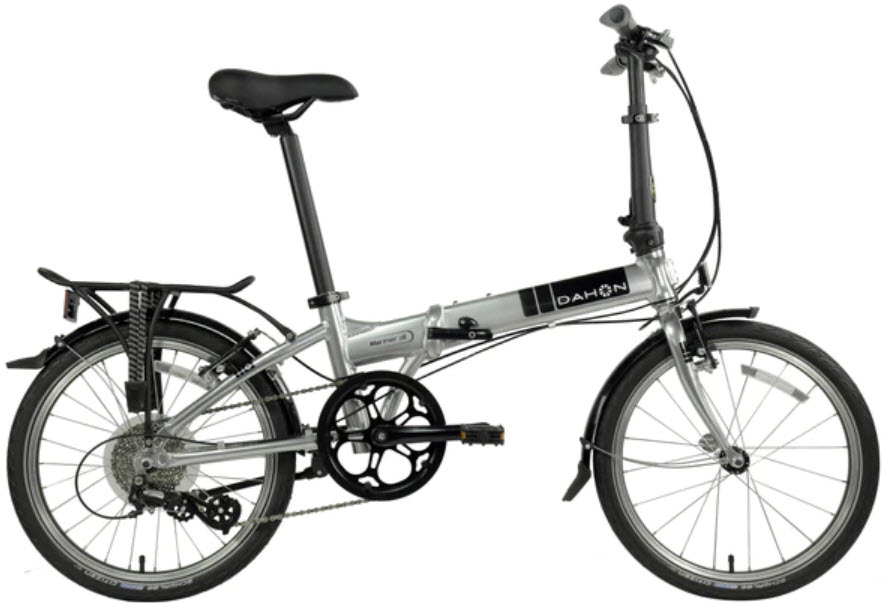 These days, with electric vehicles all the rage, it is more likely the couple will have a couple of folding electric bicycles, or e-bikes. For people who travel the world on boats and RVs, the versatility of the e-bike is unprecedented. Capable of speeds up to 28 mph on some models the e-bike add tremendous utility to the life of a cruiser, some can go up to 75 miles or more. They provide great transportation options for anyone who enjoys getting off the boat and exploring the surrounding area when they stay for an afternoon or more. In the case of the couple in Marathon for the winter, e-bikes are every bit as useful as renting a car for the season.

E-bikes are great for people who would otherwise never ride a bicycle. They provide both exercise and transportation to a wide range of people. Being able to carry a load makes them ideal for shopping. Up and down hills, it makes no difference with an e-bike.

As we’re seeing with Sidonia and Fred St. Germaine on their Great Loop adventure (Read: Nimbus LAST ITEM Begins The Great Loop), even senior cruisers can easily explore greater distances that is possible (or desirable) by walking or riding a traditional bicycle. Most RV travelers, especially those in smaller camper vans where a towed vehicle doesn’t make sense, e-bikes are tremendously useful for enjoying parks and local sights outside the campground.

A folding e-bike looks very similar to the Dahon-type folding bicycle, as they still have pedals, and the battery is often tucked away or incorporated into the design of the bike. Many fold the same way as the pedal-powered bicycle, while others shrink in size by removing battery, wheels, and folding the frame into a small package that slips into a zippered storage bag, to be stored and protected away from the elements.

E-bikes fall into one of three classes. Class 1 e-bikes have electric motors to provide assistance only when the rider pedals the bike, and power is shut off when the bike reaches 20 mph. Class 2 e-bikes can power the bike without pedal assistance, and also stop assisting when the bike hits 20 mph. Class 3 e-bikes are similar to Class 1 bikes except that the motor continues assisting up to 28 mph.

For the cruiser, be aware that the world is still trying to figure out where the e-bike fits in the overall scheme of powered travel. In our national park system, for example, changes to the laws a couple of years ago made them legal to travel anywhere a pedal-powered bicycle could go. Now, with a few years of experience of actual use, these rules are being reviewed and potentially revised based on further study. There is some concern that e-bikes, especially Class 3 bikes, startle hikers, animals, and other bicyclists when they zip out of nowhere along a trail at speed. 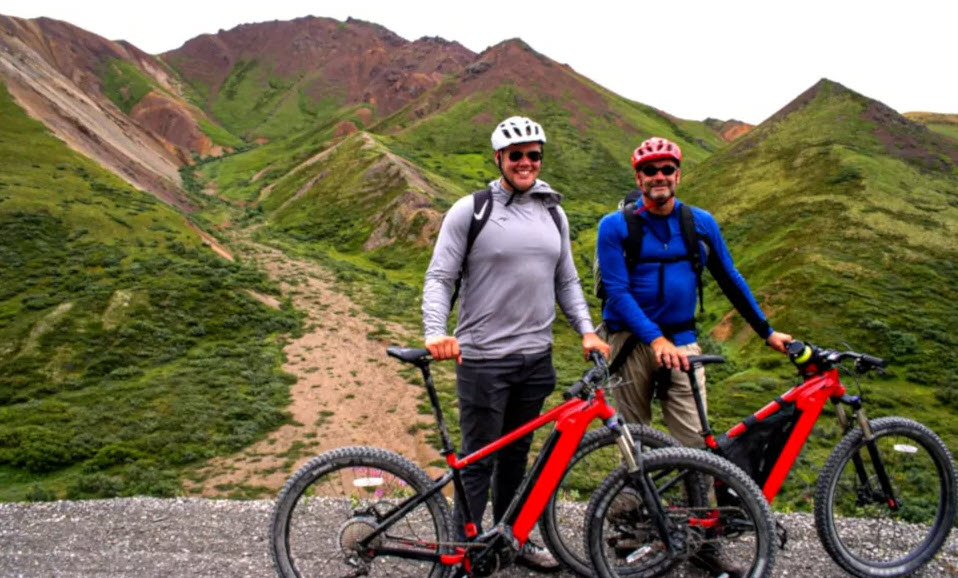 In Maryland, even some state counties don’t agree where e-bikes best fit. Some counties allow e-bikes on sidewalks, while officials in other counties feel they should remain on roadways along with other motorized vehicles.

In Florida, e-bikes may be ridden in any area or roadway that allows traditional bicycles. That includes paved roads, bike lanes, bike paths, and sidewalks. Yet some communities have their own interpretation of e-bike travel, so restrictions can change as one cruises the state.

That is also true in states such as Michigan, where there are different rules among the three classes of e-bikes. All are allowed on roads and bike paths, or on any trails where other motorized vehicles are allowed. Yet there are some travel surfaces where a Class 1 e-bike can travel, but a Class 3 is not allowed.

In Washington state, there is an ongoing study to determine where an e-bike can legally travel, and there is special consideration if a rider qualifies for an ADA permit (Americans with Disabilities Act), where they are allowed on non-motorized trails and roads wherever bicycles are allowed.

To be clear, everyone is trying to figure out where the e-bike fits. As of now, there is no consensus, and there are also lots of specific local areas of restriction. Mackinac Island, for instance, no longer allows e-bikes on the island, as they are viewed in the same way as other motorized vehicles, which are banned.

Buying an e-bike can be an adventure onto itself. There are literally dozens of brands of e-bike manufacturers on Amazon, and prices vary widely. With the incredible popularity of e-bikes in China, it is the largest manufacturer for the global e-bike industry. There are other countries that produce them, such as Taiwan, but finding a folding version will be frustrating if one hopes to source one made in North America.

Expect to pay $1,500 or more for a decent e-bike, and the price increases as the quality goes up and the weight goes down. For example, a new Lectric XP can be purchased for around $1,000, yet it is heavy at 65lbs. In contrast, a sleek and sexy Gocycle G4 weighs under 40lbs and will cost you $4,000. But it also has a USB port to charge your phone while riding to and from your latest travel adventure.

Unfortunately, the risk of theft of one’s e-bike is ever present when cruising, especially for an expensive carbon-fiber bike that cost a lot of money. The same is true for one’s inflatable dinghy and outboard. So, it is prudent to secure an e-bike with a chain and lock when it is out of one’s sight.

Most e-bikes can last about 10 years if properly stored in a protective bag out of the elements. Some will have more corrosion protection than others, but as far as I can determine, none are as marinized as the trusty Dahon Mariner. But the market is growing and the popularity of the e-bike outside of its traditional use for urban commuting will no doubt get the attention of some manufacturers who recognize its application in the marine environment.

The range of e-bikes is another consideration, and most can travel upwards of 40 miles on a charge, longer if one pedals as well. Some bikes have considerably longer range, but for the needs of the average cruising sailor or trawlerman, who just needs local transportation, that really isn’t a big issue.

Many states have laws regarding helmet usage, and most require riders wear helmets under the age of 16. But as an experienced motorcyclist of many years, I feel strongly that wearing a helmet is very important when riding any motorized bike or cycle, whether it is the law or not. Every time I sailed to Bermuda, by sailboat or trawler, I was struck by the number of tourists who dumped their rented mopeds making turns in gravel or rain and required emergency medical treatment.

I would particularly recommend buying a bike helmet that incorporates MIPS technology. MIPS stands for Multi-directional Impact Protection System. It is a helmet design that incorporates a slippery liner inside the helmet that protects the skull by allowing the head to rotate within the helmet when it strikes a hard surface at an angle, such as a roadway. By sliding the skull inside the helmet during impact, this slip liner reduces the energy transmitted by the helmet up to 50 percent. These helmets are more expensive, but what price is there for saving one’s brain from a concussion?

As battery and electric motor technology continues to advance at a record pace, transportation options such as the e-bike will continue to become standard accessories for the cruising boat.

And for the traditional cyclist who thinks e-bikes are a form of cheating on two wheels, I only suggest they take one for a spin. They will instantly get it, and quickly imagine how fun it will be to ride from the marina over to that lighthouse museum miles away for lunch. It extends the cruiser’s range of enjoyment and sightseeing, and is perfect for an aging cruising couple.

And that adds even more to the experience we call pleasure boating. 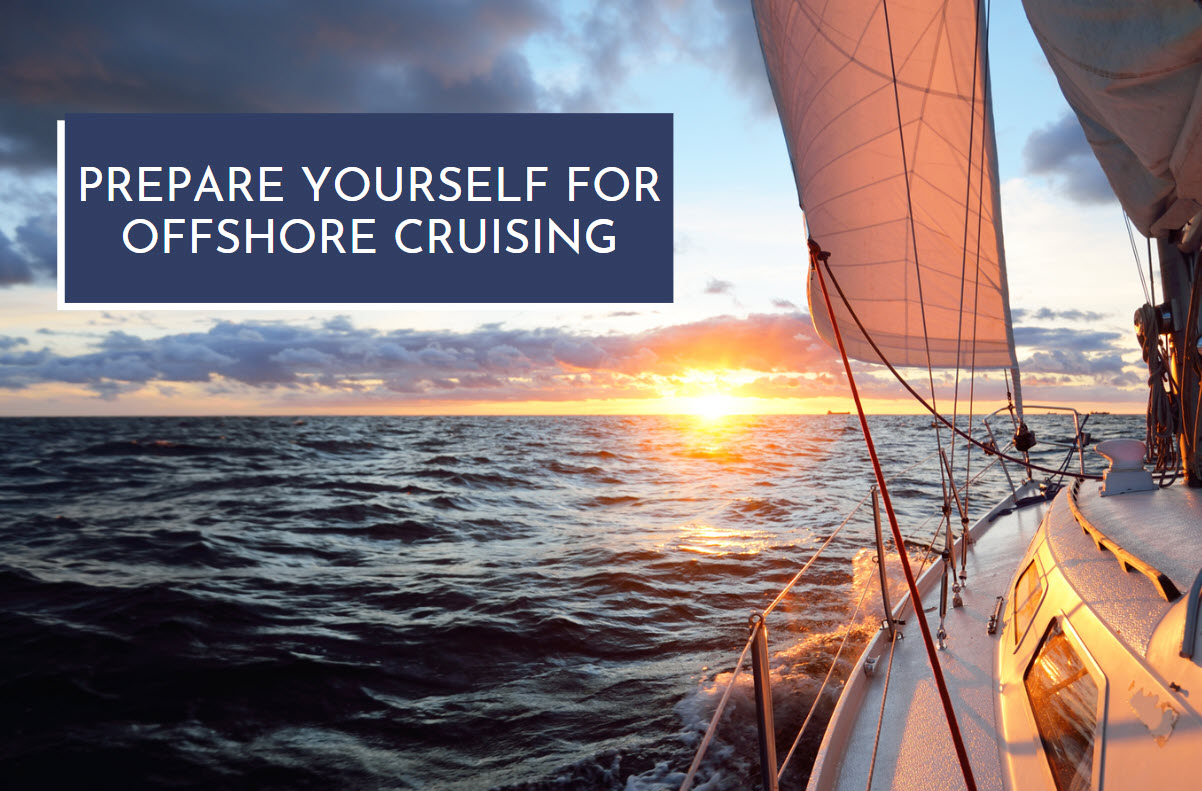 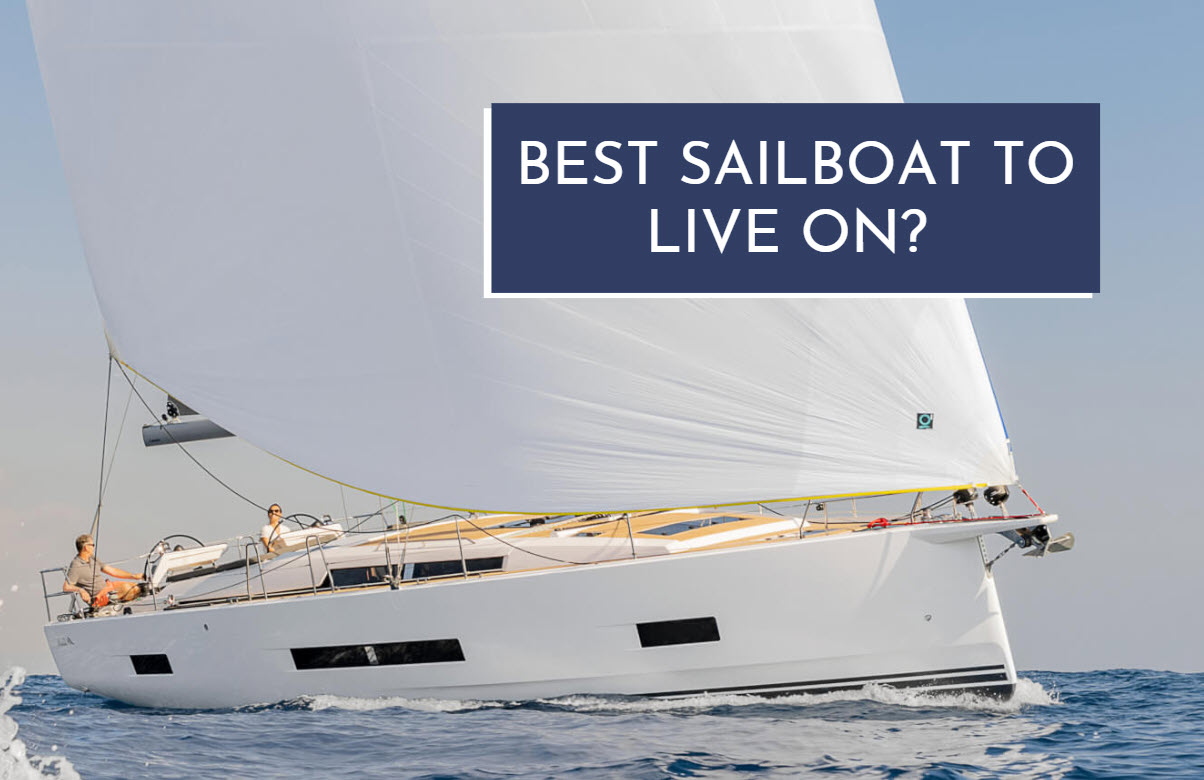