Taking On The Great Loop 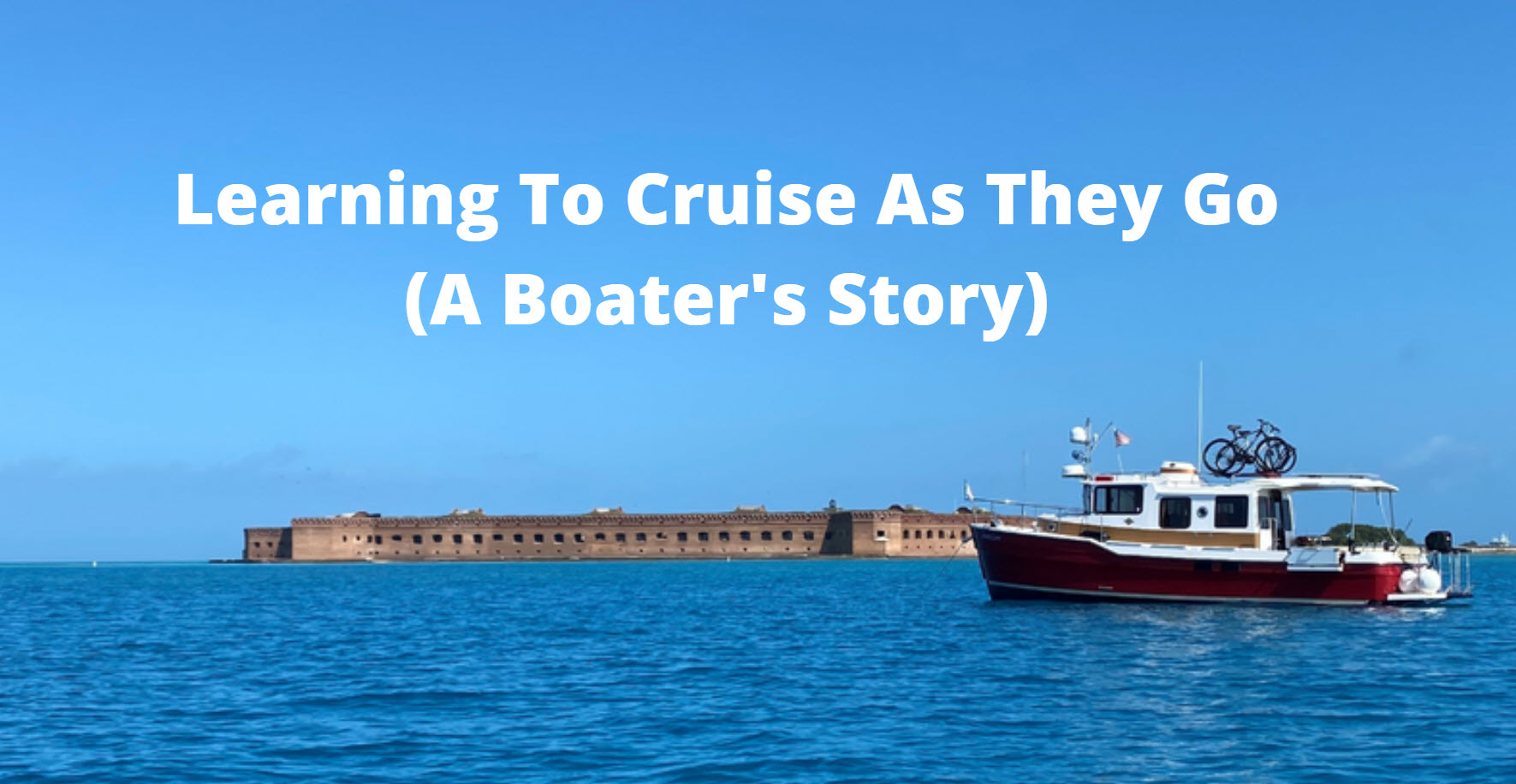 Seattle Yachts is a new sponsor of the American Great Loop Cruisers Association (AGLCA), an organization that supports those interested in the Great Loop. The trip is a 6,000-mile journey of discovery around North America, attracting boaters and non-boaters alike.

The Great Loop is essentially a circumnavigation of the Eastern U.S. and parts of Canada. There are many variations and side trips along its general route, including smaller loops such as the one around Canada’s Maritime provinces and down around New England. At whatever point you begin the Loop is where you will finish your Loop. “Crossing your wake,” as Loopers say.

There is no fixed time frame, but most people do it in a year or so, or over several seasons. I know one couple who did it in under 60 days, but that is not typical.

I put my feelers out to meet looping folks passing through Annapolis on their way around the country. My goal is to tell and celebrate their stories as they share experiences, challenges, and observations at this point during their adventure.

I recently met Bob Gannon and his wife, Graciela, at City Dock in downtown Annapolis. It was a hot Chesapeake summer day, and our town is buzzing this time of year, with people exploring and enjoying our historic little town. Some come for the ice cream, others visit the Naval Academy, but all enjoy seeing the sights along our waterfront. The impact of Covid-19 means some parking areas are blocked off and tents set up so restaurants can serve tables outside for casual dining, following social distancing, of course.

(Below: Bob and Graciela having lunch in Annapolis.) 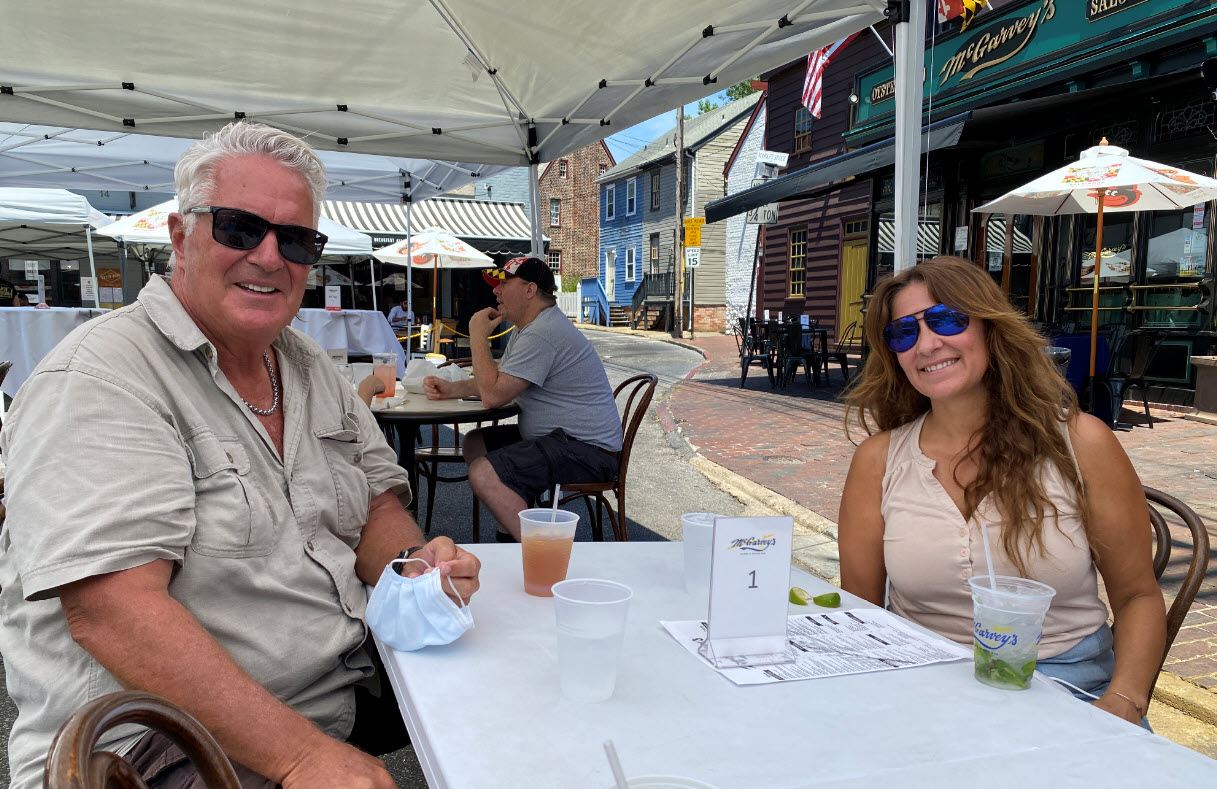 I met Bob and Graciela at their boat, docked near the dinghy dock. The tug was plugged in to shore power to run the boat’s air conditioning. Sweet Love is a shiny red Ranger Tug R-31 S, launched in February of last year. Bob told me how they came to buy the boat.

“I grew up in a large family in Iowa,” Bob said. “And I always dreamed of one day rafting down the Mississippi River, just as Mark Twain described it.” But as so often happens with childhood dreams, life got in the way and they are put on hold.

When he was a young man, Bob enlisted in the service and volunteered as a rescue medic aboard a helicopter in Vietnam. The experience was beyond what most people can imagine and left him with an indestructible conviction to never let fear hold him back from doing anything he set his mind on. Bob also resolved to do everything in this life in the time he had left. Leave no arrow in his quiver, as he put it.

He went on to a successful business career, and in 1990 decided to take up flying. With only 142 hours of flight time under his belt, he set off to fly across the Atlantic in his single engine aircraft, Lucky Lady. Unfortunately, about the time he logged 285 hours in his flight book, his plane crashed in Kenya, and was destroyed. Bob walked away.

Undeterred, he set off again in a Cessna 182 he named Lucky Lady II. Over the course of 10 years, Bob flew his single engine aircraft solo, crisscrossing the world, the longest flight being 18 hours from Oakland, California to Hawaii. When he completed his world flying adventure, visiting155 countries, he stopped flying, having accomplished what he set out to do. (Click here to watch his video on Youtube.)

In 2019, with Graciela at his side, they discovered this boating adventure called the Great Loop. It sounded interesting, perhaps a modern interpretation of floating down the Mississippi on the raft of his childhood. Neither had any boating experience, but that didn’t stop them. Bob and Graciela love travel and are keenly curious about the world.

The search for the right boat led them to the Ranger Tugs yard in Kent, Washington, in February of 2019. As Bob considered this line of smaller cruisers, one strong attraction is that they can be trailered. The folks at Ranger Tugs talked him into a new R-31 S, which they promised would be completed in time for the company’s popular owner events. These seasonal celebrations begin in May in British Columbia, followed by activities in Desolation Sound, with a September finale at the Ranger Tugs Rendezvous in Roche Harbor, on the northwest side of San Juan Island.

(Below: Bob and Graciela's new Ranger Tugs getting ready to splash.) 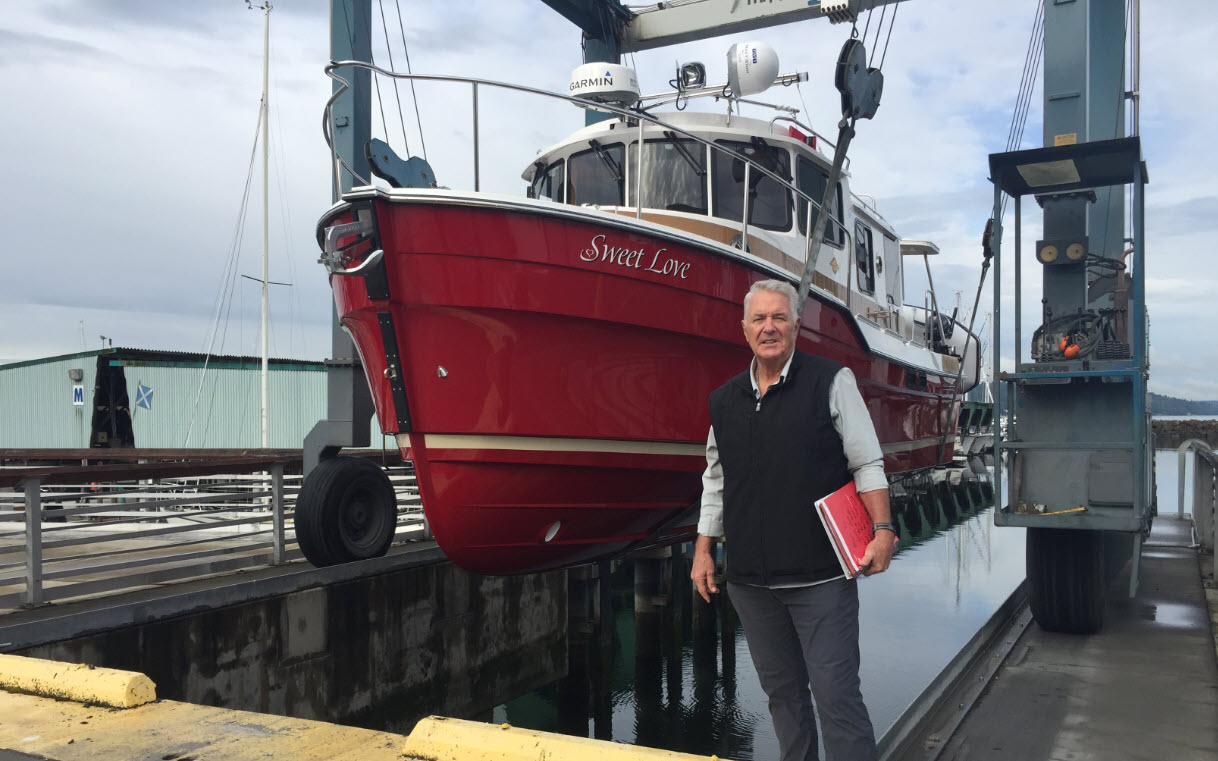 The couple took online boating classes and planned to learn over the summer how to handle the new boat, gaining as much as they could from other owners during the owner events. Graciela learned to handle all lines for docking and mooring, while Bob drives the boat. They share navigation duties and are extremely impressed with their Navionics charts on Garmin electronics.

Related: Getting Ready For The Great Loop

After the Roche Harbor rendezvous, a driver loaded Sweet Love onto a trailer and headed south from Seattle to Chattanooga, Tennessee. The couple planned to attend the AGLCA Fall Rendezvous at Joe Wheeler State Park in Rogersville, Alabama, in October, which would be the official starting point of their Great Loop.

(Below: "Sweet Love" is on the trailer and ready for its road trip to Tennessee.) 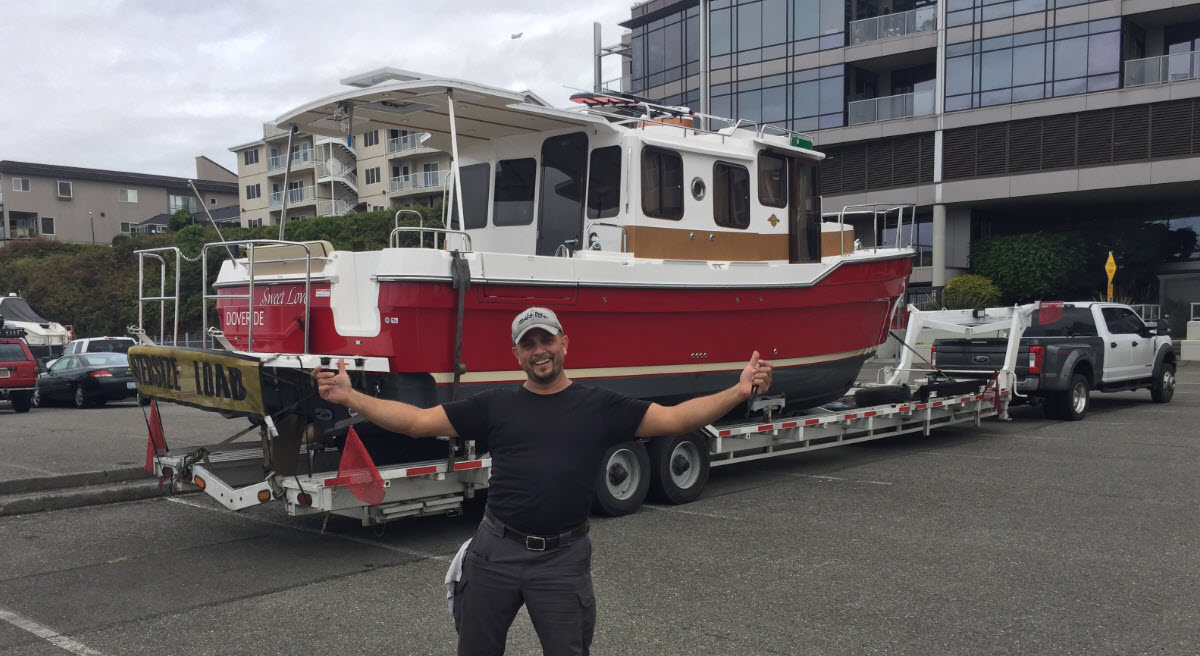 By the time they reached Annapolis for some warranty repair work (a failed generator temperature sensor), they had already had quite an adventure. They attended the Ranger Tugs Rendezvous at Burnt Store Marina in Punta Gorda, on the Gulf side Florida, and loved a side trip to the Dry Tortugas off the Florida coast.

Even though they were forced to halt the trip early March in Jacksonville due to Covid-19, it was only a temporary stop as the country worked through restrictions and closures. They went home to isolate and did not return to the boat until the end of June. They finally left Jacksonville on July 1st, heading up the ICW to continue their Great Loop.

Graciela told of their rescue of a sailor from a flipped Hobie Cat in gnarly Albemarle Sound, which thankfully had a happy ending. They also decided to take the optional ICW route up the Dismal Swamp from Elizabeth City, North Carolina to Norfolk, Virginia, which they also thoroughly enjoyed.

(Below: The Dismal Swamp is an optional route for the Great Loop.) 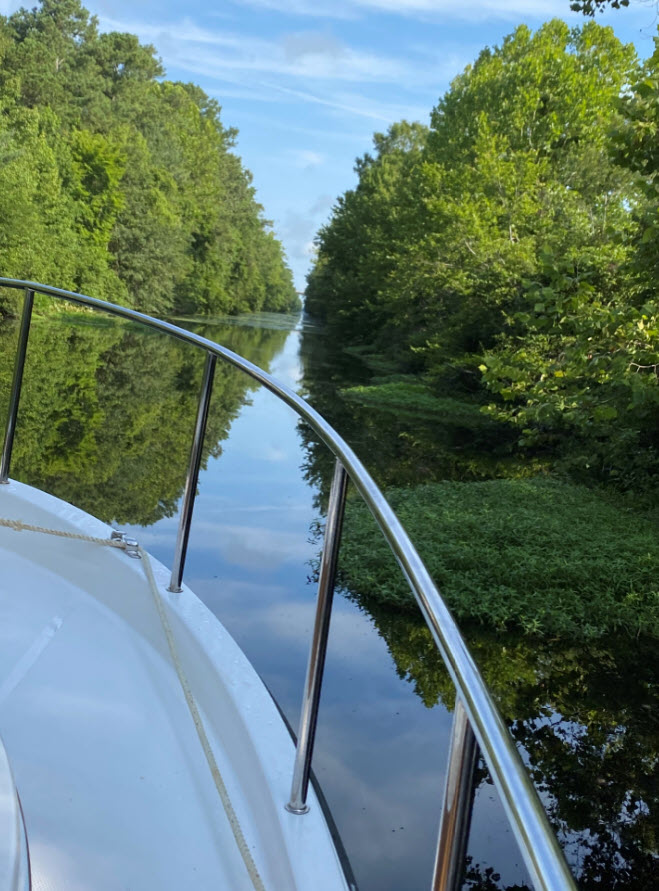 As you probably know by now, Bob and Graciela are movers, not stayers, as every day they move. Which so fits Bob’s philosophy of life.

“Like everything else in life,” Bob explained, “Jump In!”

They said they would much rather spend one day in five places than five days in one place. It has been their mantra since leaving Chattanooga. Sweet Love has 470 hours on its 320hp Volvo diesel and the boat traveled 4,500 miles by the time they reached Annapolis (the hours and miles include time in the PNW).

Graciela said how much she loves the tiny home concept of small boat living, and Bob agrees, although he would prefer more lounging space, like a settee where he could stretch out. Oh well, he shrugged, this is fine for us, especially as it allows us to consider shipping the boat to Europe to explore its canal systems.

Their style of boating is to stay flexible and let their curious spirits dictate where they go. The most fun they have had on this trip is to be able to just pick up and go, without agonizing over schedules or details. While I found them very social people, they admit they generally avoid crowds and prefer a more solitary lifestyle. They wore masks during their time in Annapolis, which they explored with the bicycles they carry aboard Sweet Love.

(Below: "Sweet Love"docked in Annapolis.) 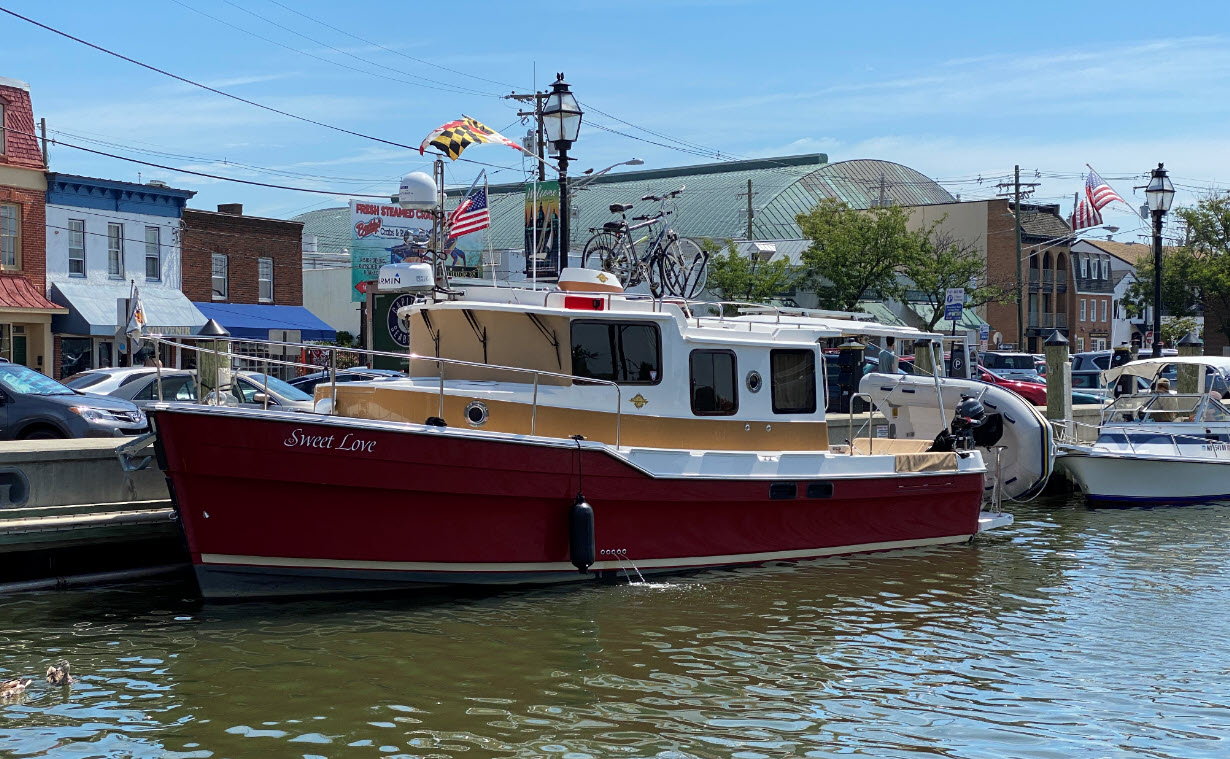 Their plan when they left Annapolis the next day was to visit Rock Hall then Baltimore before heading up the Bay to parts north. Obviously, Covid-19 continues to impact travel and even though they are solitary people, they wish there were more traditional Looper events and raft ups where couples visit each other's boats.

(Below: "Sweet Love" docked in Baltimore with the city skyline in the background.) 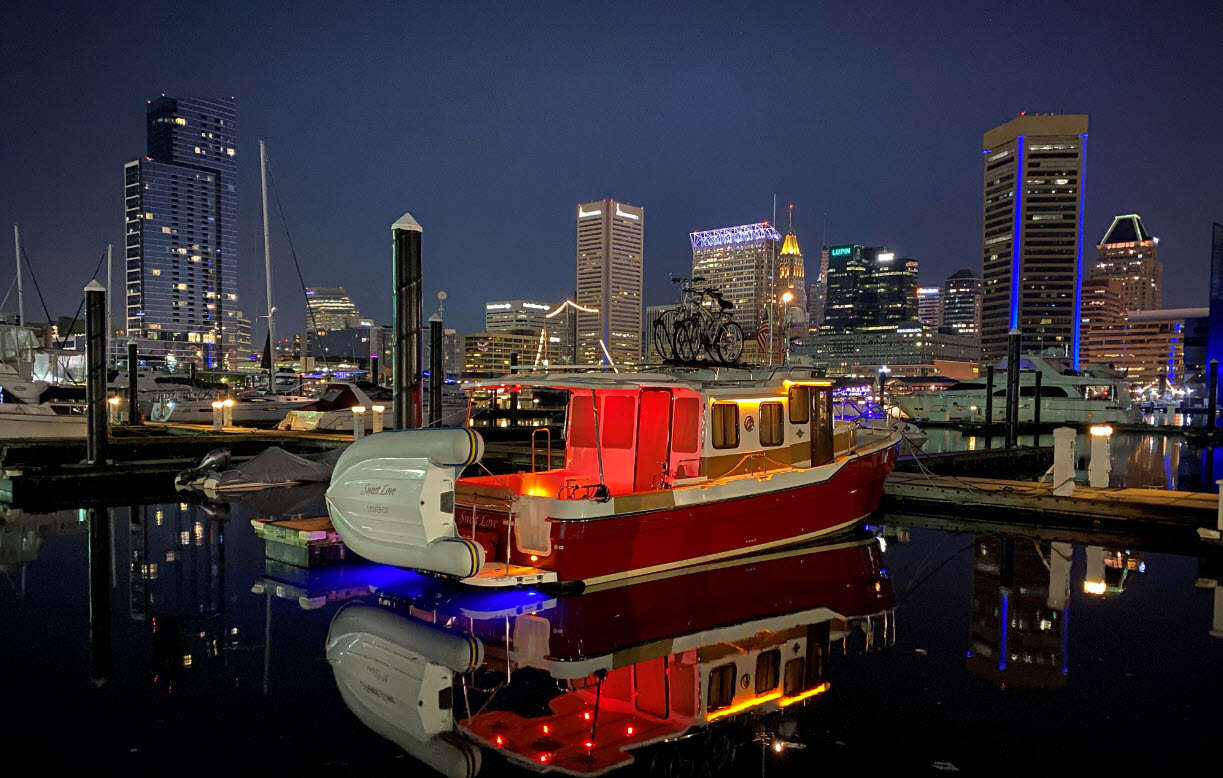 And Covid-19 makes their northbound travel plans uncertain. If Canada opens up, they would like to head up the Hudson River, Lake Champlain into the St. Lawrence River, visit Nova Scotia, then down around New England and back into the Hudson River to continue the regular route of the Loop. No matter what happens over the next couple of months, they will stop for the season at the end of October at Winter Harbor Marina in Brewerton, New York on Oneida River. Despite their steady routine of moving every day, they have no problem leaving the boat either. They will complete their Great Loop over the course of several years. They are flexible.

Their advice to anyone thinking of doing this trip, even if they have no prior boating experience, is to not wait. Bob is 70, at the beginning of the Magic Decade that I often talk about. He told me of his contemporaries who keep putting things off and then some condition or illness develops and ties them into regular medical appointments. Taking trips becomes less possible and soon becomes impossible.

The Magic Decade is also how he justified buying a new boat for this trip. He knows he can reasonably expect everything to work well for 10 years without the constant repairs and breakdowns that are a certainty on an older boat. So, he wisely bought a new boat. I have seen this logic prove itself over and over. It is reality.

Bob and Graciela sent me photos from Baltimore and I’m sure they are well on their way north by now. As new cruisers, their spirit of adventure impressed me with their can-do attitude. There is much to be said about living life to the fullest right now, and not put off dreams when the window of opportunity may not come this way again. 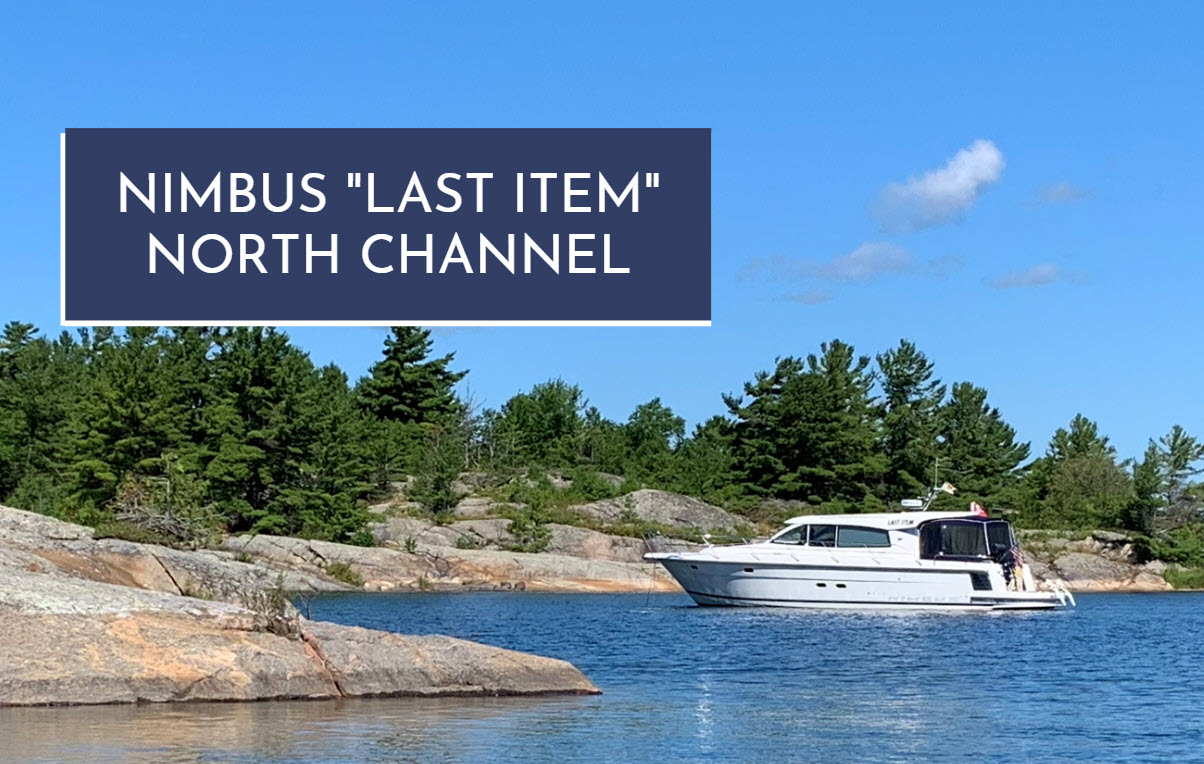 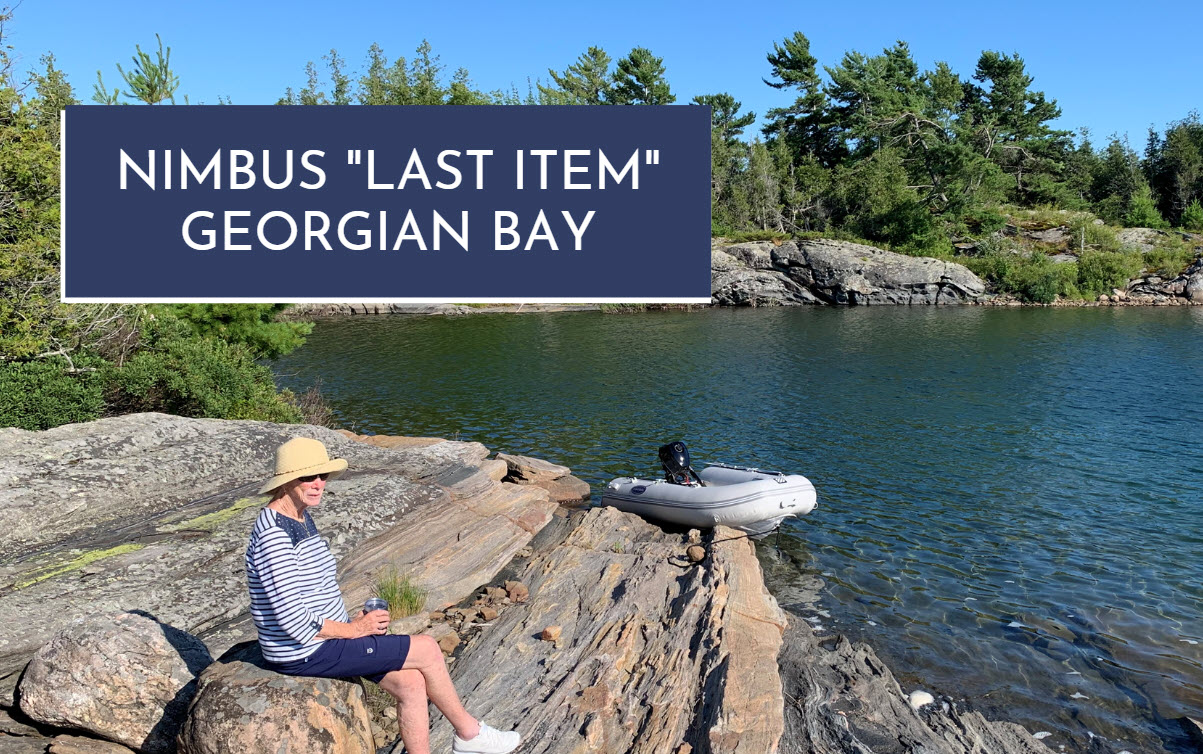 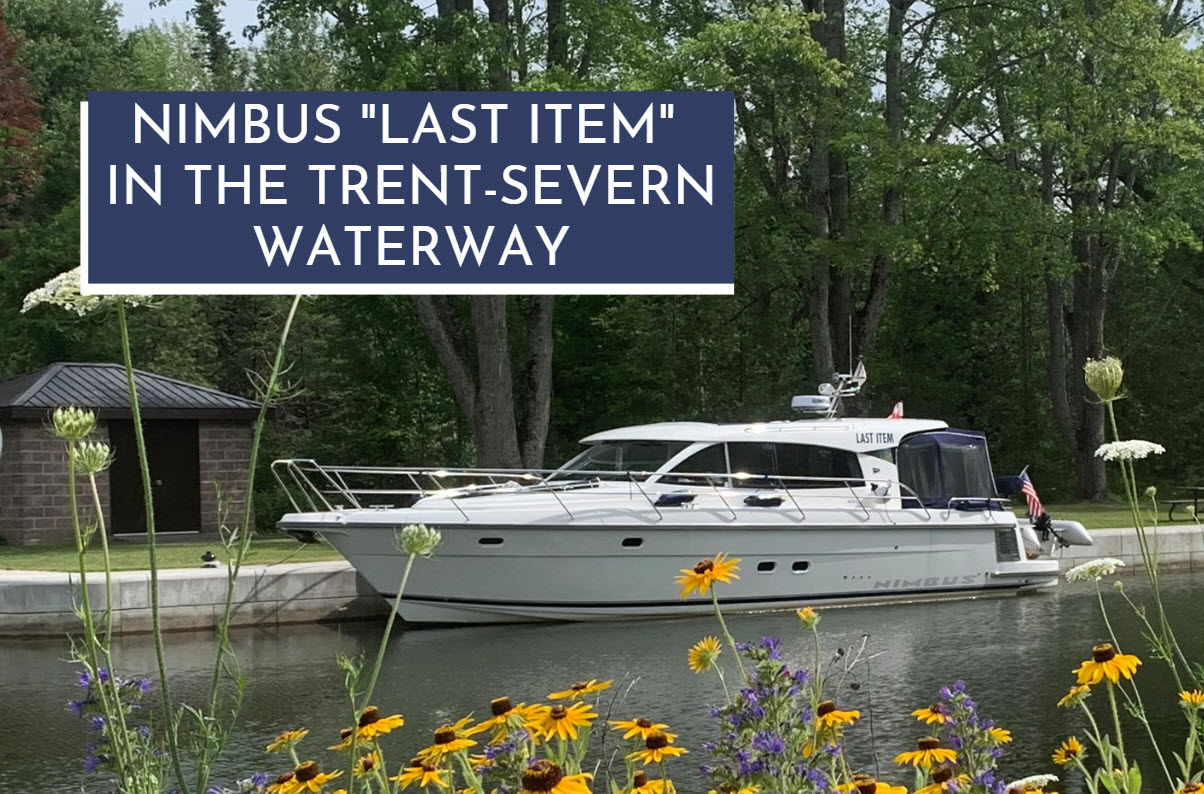