When I first got the email that the 2018 Nimbus Boats dealer meeting was happening, I couldn't wait to book my flight. The thought of spending time on Karingon Island in Sweden was certainly appealing, but I have been waiting to get my hands on all three of the new Nimbus models since I first saw the designs. The future of Nimbus is exciting! Extremely popular in the European markets, Nimbus brings to America a different level of practicality, performance, and safety that the Swedish-company has been perfecting since the early 1970's. Now that I've returned home from the trip, I haven't stopped talking about Nimbus to our team here at Seattle Yachts and our customers. I'm especially excited that later this month we will all head to the 2018 Fort Lauderdale Boat Show to join our Seattle South Florida team at the Nimbus display with 5 Nimbus models.

Leaving Vancouver Airport, we had several stops on our way to Gothenberg before boarding a boat to travel to Karingon Island. As I sat thinking about the days to come aboard my Lufthansa flight from Frankfurt, my train of thought was interrupted by several creaks and groans in the plane. Having flown many miles all over the world to various shipyards, I've been on my share of less-than-desirable flights. What I have not seen before that was unique to this flight was the long strip of duct tape holding together two ceiling panels. Not exactly a confidence builder on a plane, but we made it and that's all that matters! 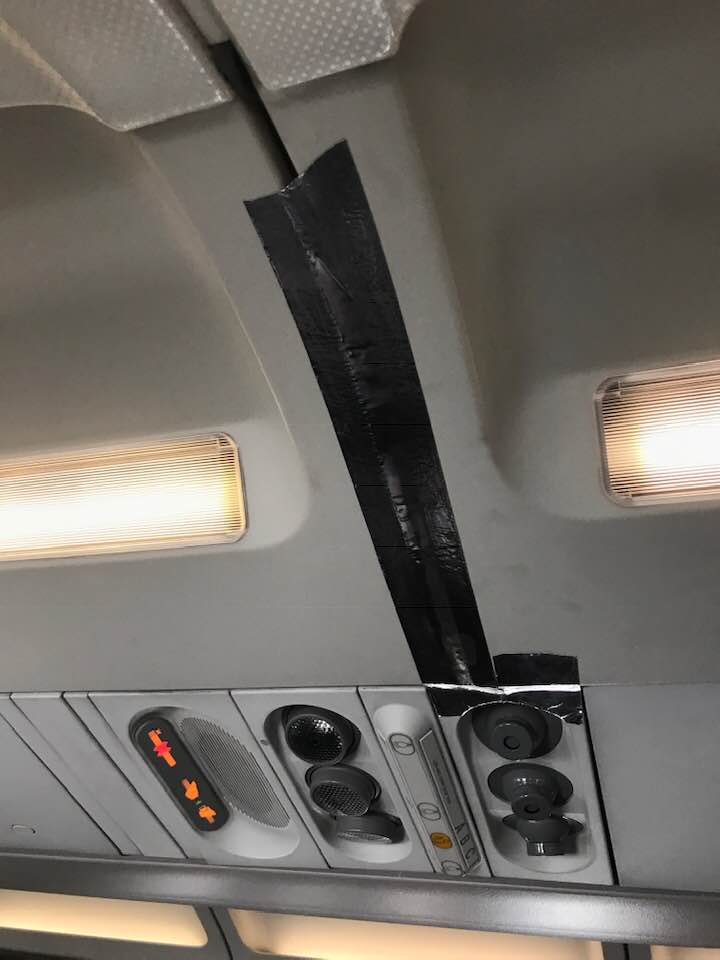 Once we arrived in Gothenberg, it was time to rest from the journey and wait for the other dealer meeting attendees. The next day's trip would be a 38 mile boat ride to Karingon Island and with rain plus 40 knots winds, it was not looking enjoyable. Thankfully our day of travel saw sunny skies, light wind, but some brisk temperatures. Over 50 attendees travelled on 9 boats to the island off of the coast of Sweden. 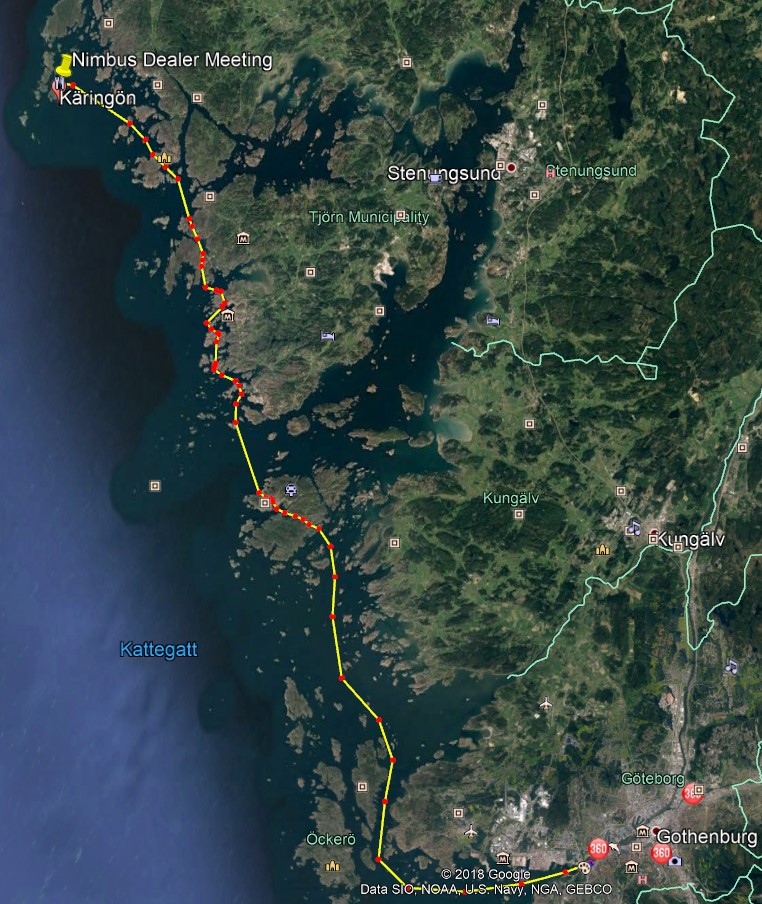 Our caravan of Nimbus Boats stopped at 3 small villages on the way to Karingon Island which gave us the opportunity to hop on each other's boats. This gave everyone the opportunity to experience the full Nimbus range in real world conditions. . I rode on the 405, 365, 305 and C9. Having quite a bit of experience on the 3 Coupe models, I was keen to experience the C9. The Coupes were predictably stable and smooth in the 3-4 foot chop. The C9 was phenomenal. We mostly ran with the other boats at 20-25 knots but stepped it up to 40 knots several times to see how it handled in the rough water. An "E Ticket Ride", for sure.

We arrived in Karingon at around 1 PM and were treated to a very traditional Swedish lunch of pickled herring (yum), a salmon salad, potato salad (Swedish style), boiled potatoes (they like potatoes there), and other dishes I really can't describe, however they were delicious.

Karingon Island is so unique and spectacular at the same time. There is literally no traffic on the island which changes its character and scenery with the seasons. This is a seaside village with beautiful wooden houses and piers, but is also primarily a fishing and boating culture that dates back to the late 1500's. There is a bay that is protected from the waves allowing for safe docking and mooring. It's difficult to describe the atmosphere of Karingon Island in just a few short sentences, but I highly recommend a visit for a few days. The seafood is as fresh as you can get at any of the eateries that lay along the quayside. 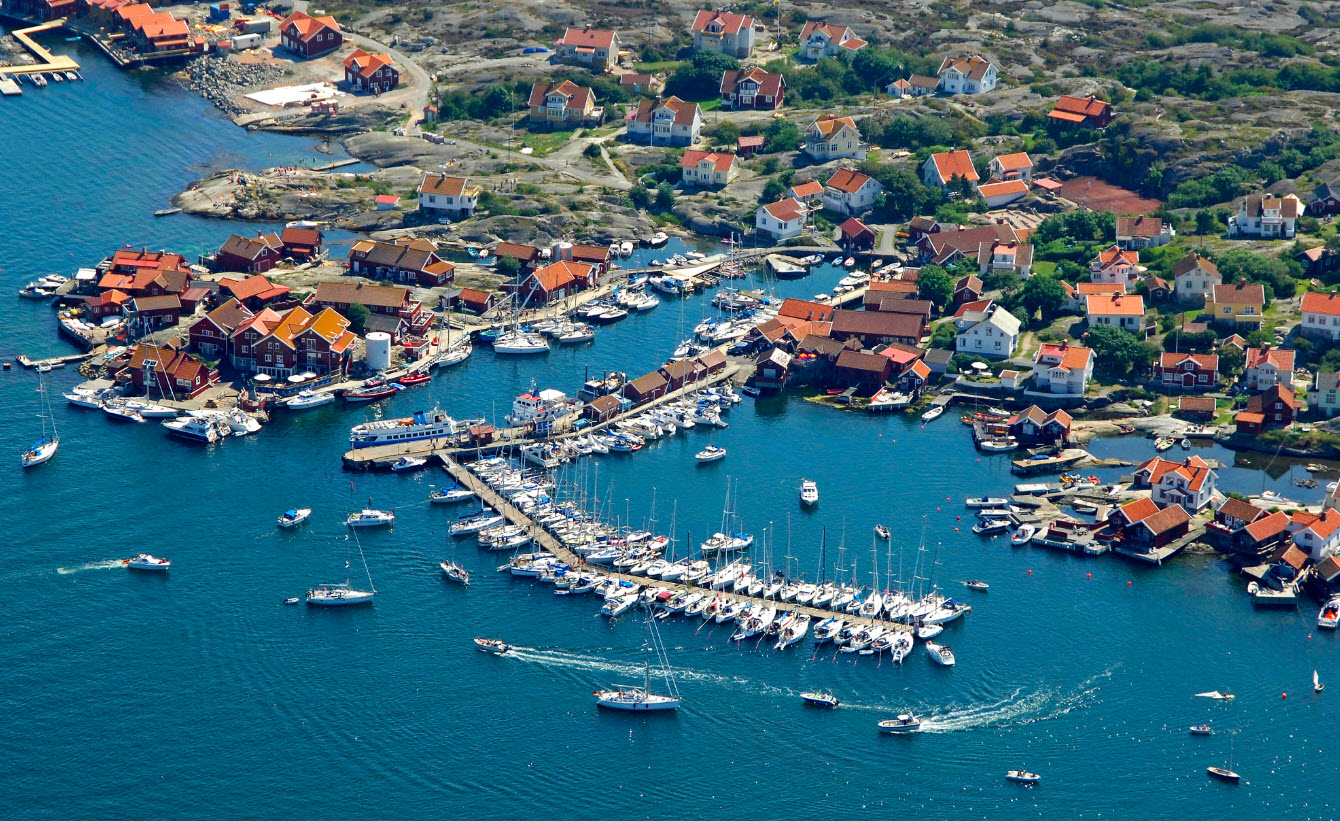 After lunch we had the first half of the meeting, lasting till 6pm. We were given an overview of where the company stands, the philosophy of the ownership (R12 Kapital), and the structure and manufacturing plan for the (now) 4 Nimbus brands. The Nimbus Coupe series will continue to be built in Mariestad, Sweden, the Paragon series will be manufactured at the Storebro factory in Storebro, Sweden, the WTC series in Poland and a new line, Alukin, in Gaddvagen, Sweden. Alukin are aluminum boats, suitable for commercial or pleasure use. It is unclear whether we will have access to them here in the US, but they were intriguing nonetheless.

Dinner and a beautiful sunset ended the day. You can see the Nimbus and Alukin lineup to the right in the photo below. 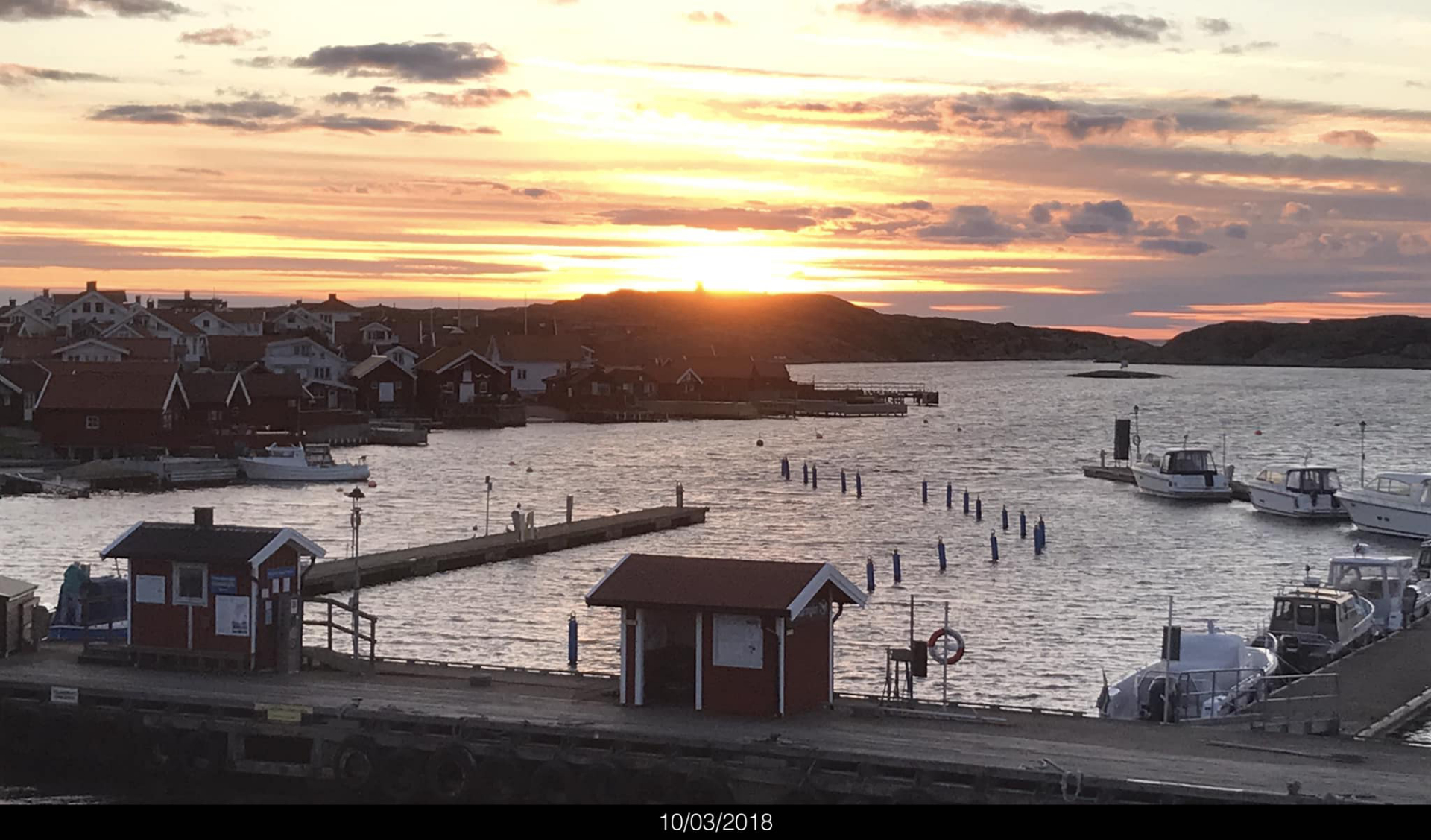 The following morning we were introduced to renderings of several brand-new concepts that Nimbus will debut at Boot Dusseldorf in January 2019. These future developments are top secret and cannot be announced yet, but we promise to keep you informed as soon as we are allowed!

After lunch, we boated back to Gothenburg and had a night to ourselves. I took the opportunity to have dinner with the dealers from the UK, France, Germany, and New Zealand. A great bunch, these Nimbus dealers. All are extremely enthusiastic about Nimbus and how the brand and new models have been so well received. Of course, Nimbus has been a household (boathold???) word in the boating community in Europe for many years, but in New Zealand it was introduced about the same time we took it on here in the U.S. The New Zealand dealer was awarded the Dealer of the Year award this year to give you some insight in to how well the brand was received!

My initial thoughts are that the Nimbus Commuter 9 will likely be a very popular model in the Pacific Northwest as it has a completely enclosed cabin. With the diesel heat installed, it will make a great island boat. The Weekender 9 and Tender 9 will sell well in warmer climates, but also in the PNW as they have an optional T-top and canvas enclosures. The layouts all include sleeping accommodations and an enclosed head. Galley is optional on the Tender 9.

On Friday we had a factory tour. I noted approximately twice as many boats in the final assembly area as I saw last year. Nimbus is truly on a roll.........20 boats complete or nearly complete. (There are some behind me and 3 outside waiting for pickup by the shipping company.)

The Fort Lauderdale Boat Show will be the first time that all 3 new Nimbus WTC models will be in U.S. waters. I would like to personally invite anyone going to the show to stop by and let us show you the Nimbus brand. Our display will be at the end of B-Dock near Outer Reef and Hatteras. Our Nimbus line-up will include the 405 Flybridge, the 34 Nova, the W9, T9, and C9. If you'd like to receive more information about Nimbus, please don't hesitate to contact one of our 3 locations in Anacortes, WA, Seattle, WA, and Jupiter, FL.