With DNA born from the unpredictable waters of the Pacific Northwest, American Tugs are widely known among the most seaworthy and well-built vessels for long-distance cruising in the world. Utilizing the finest materials, the latest technology, and the unrelenting passion to create a finer live-aboard and cruising yacht, American Tug boats are designed for adventure from the hull up. Seattle Yachts is proud to be the exclusive dealer for American Tug in the Southeastern U.S. Covering from Florida to the Mississippi river, Seattle Yachts can help you purchase or build your own American Tug from one of their five models offered. 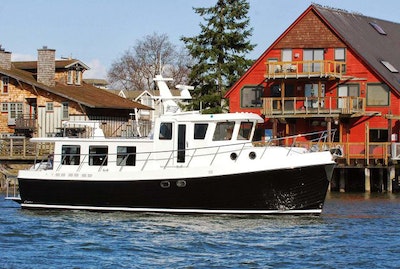 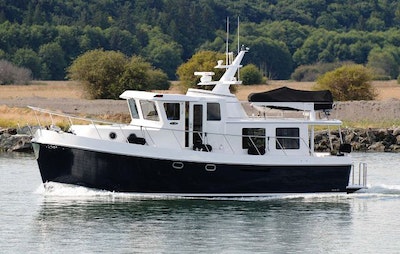 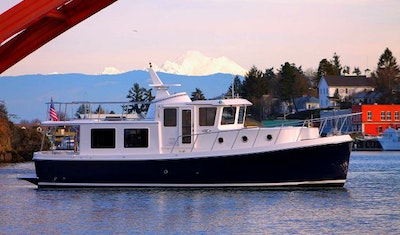 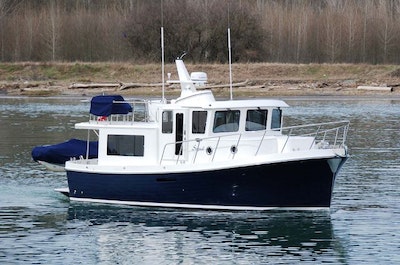 Here is a montage of American Tug exteriors that have been built and delivered over the last several years.

American Tugs is owned by Tomco Marine Group which is located today in La Conner, Washington. Tom Nelson was the original brain child of Tomco Marine Group and along with Lynn Senour, a West coast marine architect, sought to create a new company built around high-quality, long-distance cruising vessels. Tom had previously been both President of Nordic Tugs and owner of the Nelson Yacht Corporation which built custom 70 - 90 foot yachts.

Today, Mike Schoppert is the President of Tomco Marine Group and has an extensive background in the boating industry in various aspects. Mike originally began his career in boating at Uniflite Corporation as an expert in fiberglass technology. From there, Mike worked for Chris-Craft, Tolly Craft, Oceanus, and at Nordic Tugs before coming to Tomco. Mike works closely with Tomco Vice President Kurt Dilworth who was also previously at Nordic Tugs. Tom, Mike, and Kurt are a great team that each bring unique backgrounds and ideas on how to elevate American Tugs and the owner experience.

American Tug currently builds five models. The smallest American Tug model is either the 365 or the Waypoint 36, both of which have a LOA of 36' 6". The "middle siblings" include the American Tug 395 and 435, while the largest and flagship model is the 485.

How many American Tugs are built each year?

What makes an American Tug boat special compared to the competition?

American Tugs are semi-custom trawlers designed for extended cruising of coastal waters. The tug-like styling is a carry-over from the original commercial fishing boat hull every American Tug is built on. The forward raked windshield, high freeboard and dramatic sheer are all hints of a heavy-duty workboat, but the Ultra-leather upholstery, Sapele cabinetry, and warm lighting provide an extremely comfortable home for your time on the water. With our semi-displacement hull, we don’t have to wait for the weather to be perfect.  The extra horsepower that comes standard in every boat is designed to allow the captain to tune the boat for the conditions.

Our delivery process is painless.  No spending months commissioning a new boat.  The boat can be made turn-key ready, directly from the factory. Customer service is a top priority for our boats, worldwide.  We work directly with customers and their own yards to handle warranty and repairs when necessary.

Where is your closest American Tug dealer in the Southeast?

Do American Tugs hold their value for re-sale?

The short answer here is yes they hold their value quite well compared to other builders, but of course this all goes into how well the boat was maintained, how many hours, and the current market conditions. As one of the leaders in yacht brokerage, Seattle Yachts has strategically placed offices in the Pacific Northwest (Seattle and Anacortes), Southern California (San Diego), and in South Florida (Jupiter) that can assist you in the sale of your American Tug. We also have a satellite broker in the Philippines! Seattle Yachts uses the latest in digital marketing tools, two MLS databases, and a very strong print magazine presence that can help move your pre-owned American Tug quickly and efficiently.

If you have an interest in long-distance trawlers, we also recommend you read our guide to Buying and Owning A Trawler Yacht. It's quite extensive and really offers several tips on the buying process and ownership experience.